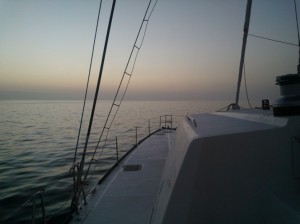 While I was up in Seattle for my side trip, Jenna and the kids moved Sophie from a dock at the Bahia Corinthian Yacht Club to a mooring at the Balboa Yacht Club. One of the nice benefits of being members of the Seattle Yacht Club, in addition to friendship with many of the great people there, is that we get reciprocal privileges at hundreds of yacht clubs around the world. In the case of Newport Beach, it meant that we could stay for free for three days at each club. The Balboa club seemed like a cool group with a very active juniors sailing program and a launch that reminded me of the yacht clubs at the other Newport.

But after 5 days of hanging out, including a Christmas parade and Jenna’s field trips with the kids to Disney and California Great Adventure, we knew it was time to complete the US portion of our trip and sail the 65 miles down the coast to San Diego. We left at 6:00 AM Monday and once again had no air. I took the photo above as the sun was coming up the coast.

After 45 minutes of motoring our friends returned … 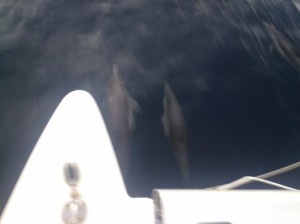 I’ve joked a few time already on this trip that when thirty dolphins discover your boat and decide to play with each other 12 inches off your bows, and they do it constantly for hours on end, well, after a while it gets kind of boring.

It doesn’t. Ever. I was joking.

We arrived off of Point Loma around 1:00 PM, just in time for the wind to pick up and for us to see a nuclear submarine depart San Diego Bay. Kona Kai Marina is Sophie’s new home for the next couple of months as we visit family back east for the holidays and then get the boat ready for a March departure for the South Pacific. We’ve traveled over 1,200 miles since September, and we have definitely reached the stage where Sophie has become our home. We are very happy with our trip so far.