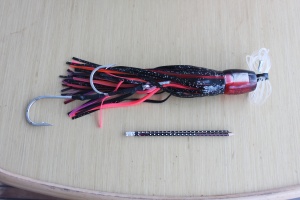 As some of you know, yesterday was my birthday. I got to choose how we would spend the day, and I chose to go fishing. So we got up at 6:30 AM and motored over to the gas station, which is what all the fishermen here do before they head out. Unfortunately they weren’t selling duty free fuel (which we are eligible to buy), so we skipped the diesel. But I did buy some donuts, baguettes, new sunglasses (I’ve gone through three pairs since March), and the bad boy pictured above. That baby is fifteen inches long with 2 inch wide hooks and will be towed behind Sophie from now until the end of time.

Happy Birthday to Me!

By the way, one potential problem with leaving at 6:30 AM to go fishing is that if you and your wife stayed up until 2:00 AM that same morning watching the complete fifth season of the TV series “Friday Night Lights”, you can be a little tired.

But that didn’t stop us. After the Shell Station we motored out of Teavapiti Pass on Raiatea to go fishing. It was a sunny day with a 15 knot easterly and a small 1-2 meter swell with a long period (15 seconds) coming from the south. The shorter the period, the steeper the waves and the greater the discomfort if you were heading into them. 15 seconds means not much discomfort. Our plan was to cover a triangular course: head east about 10 miles away from Raiatea towards Huahine (which is 20 miles away), then turn west-northwest towards Toahotu Pass and Tahaa, the island immediately north of Raiatea that shares a reef with it.

When we came over from Huahine last week, we caught a tuna in this middle ground between the two atolls and assumed that was where we would catch the big one using the bad boy pictured above. As part of last week’s catch, we saw over a 100 birds hanging out at this spot, feeding heavily on small surface fish. The theory and practice around here is that if there are birds feeding on the top, there are predator fish (tunas, mahi mahi, marlin, etc.) feeding from below. So the whole idea is to look for birds feeding, troll through and around them, and then catch fish.

When Max and Becca were with us, we passed a couple of these bird feeding towers. When we got our subsequent double takedown/whale siting a week later, it was through one of these spots. So yesterday, that was what we were looking for.

What did we see? Nothing. The occasional bird flying low over the water doing the same thing we were doing, looking for fish. We saw nowhere near as many flying fish as normal. There weren’t even many fishing boats out.

But it was a beautiful, sunny day, and we weren’t complaining. For the last week we’ve had a series of fronts come through and the weather has been pretty bad with consistent 20-30 knot winds along with 3-5 meter swells with a relatively short period along with frequent rain. We’ve been quite happy to have been holed up inside the reef of Raiatea during this time.

So we went out to our 10 mile spot and saw no birds but did see two local fishing boats who were fishing for tuna at depth. This involves using baited hooks similar in size to the ones on bad boy above, except instead of trolling they were attached to 20 pound rocks which in turn were attached to plastic floats the size of a soccer ball which in turn were attached to their boat. The idea is that the fish hits the bait, becomes exhausted hauling the rock/float combo and is then pulled into the boat by hand. We had seen a guy in Manihi catch a 40 pound Yellowfin right outside the southern pass using this technique.

But that wasn’t our plan, so we circled these guys, waved hello, and made our turn towards Tahaa.

With that turn, our ride became much more comfortable since we were now heading with the wind and the swell. It wasn’t bad before the turn, meaning we weren’t getting spray up to the flybridge, there really weren’t many whitecaps, and the kids down below watching movies weren’t getting sick.

But after the turn it felt like we were out for a cruise on Lake Washington.

By the way, have I mentioned lately that Jenna seems to be doing all of the boat driving and navigation these days? Well, she is and she loves it and has become quite good at it. I love it too because it frees me up to do boat projects and more importantly, to fish.

And it makes me occasionally realize that I actually had the luck to marry a girl who likes to drive boats.

So after she made the turn and we headed back to Tahaa’s eastern pass, I kind of whined, said it was my birthday and asked if we could go around Tahaa and enter the lagoon from its western pass, Papai. This would add at least 2 more hours to our trolling even though it was near noon and we were exhausted from our TV marathon the night before. But it was a beautiful day and our trip would force us to look at Bora Bora. It’s only 10 miles away and was the site of our honeymoon 10 years ago along with being our next destination after Tahaa.

So of course she said yes and went downstairs to make pizza baguette paninis for the kids while letting them know that their movie marathon, pretty much their longest since San Diego, would continue through the afternoon. No complaints there.

So we trolled along Tahaa’s northern and western coast, saw the occasional hungry bird and startled flying fish, and nothing else.

After entering Papai pass, Jenna drove the boat inside the lagoon around Tahaa’s southern points and we then picked up a mooring in Haamene Bay in front of the Hotel Hibiscus. There was still some daylight, so Jenna did her 75 pushups (we’re both still following the book) while the kids and I played Rat-A-Tat-Cat. We then played a birthday game of Scrabble. Leo won, mainly by getting a bingo on a triple word score on his first turn.

We then dinghied in to the hotel’s restaurant, which is appropriately names Chez Leo. It’s what we thought all of the beach restaurants in Polynesia would actually look like: big open room that reeks of history with hundreds of flags and burgees hanging from the ceiling.

There was one other party/boat there, Scott Piper and crew from the J/Boat Pipe Dream IX. He’s on his fifth circumnavigation and we’ve been supposed to meet up with him somewhere in this neck of the woods. (Mike and Lee Brown, we finally did it! And yes, we are now using Costco vodka instead of a baseball bat to kill our fish.)

Man, did we pick a great place to eat! There’s no menu here, just Fredo greeting you and saying “tonight we have crab, fish, and New Zealand steak.  For entrees we have quiche Lorraine and fish carpaccio.”

We all had the quiche, Jenna and I had the carpaccio, Jenna and Leo had the crab, I had the marlin steak, and Hazel had the kiwi steak. They even brought out a caramelized tarte tatin with coconut for my birthday cake.

It was a wonderful meal that capped off a wonderful day. I am quite grateful with how my life is going right now.

Except I wish I could catch more fish. 🙂

4 thoughts on “Boat Driving on My Birthday”