We are in the Kingsom of Tonga, the week has gone by way too quickly, and we are having a wonderful time. It’s that simple.

We covered the 250 miles from Niue over 2 nights and a day, arriving last Sunday at sunrise. It was a slow, pleasant downwind sail (above) that was made even more fun by keeping in radio contact with our traveling companions Orkestern (Sweden), Ninita (Sweden), and Hydroquest (Canadia). The only downside of the passage is that we caught exactly zero fish. On Saturday each of the Swedish boats had landed a Mahi Mahi, and I couldn’t let these little … sloops beat Sophie and her 4-lines-in-the-water when it came to the passage fishing derby, so I offered a chocolate reward to anyone on board who spotted a game fish. Leo took the offer quite seriously, and 30 minutes later alerted all of us in time to see a big, muscular Mahi Mahi hit one of the 8 meter, 300 pound meatlines directly behind the boat. He fought for 3 seconds, snapped the line like it was a thread, and angrily swam off. Although we lost the fish, it was thrilling to watch a fish hit the line right behind us.

So on our passage, we lost the fishing derby, and Hydroquest arrived ahead of us to win the passage race, but Sophie TOTALLY won the passage whale watching derby. Our destination was the port of Neiafu in Tonga’s Vava’u Group, and to arrive there we had to sail over the top of the island of ‘Uta Vava’u and then 10 miles upwind into a protected bay. Well, since we still hadn’t landed any fish, and we had had an easy passage, we decided to actually sail upwind these last 10 miles.

It was like we were back racing in Puget Sound — 15 knots of wind, no swell, and surrounded by islands as Leo, Jenna and I tacked Sophie back and forth up the bay. That’s when we saw 2 humpbacks lazily hanging out next to an island, slapping their flukes and having a good old time. Jenna was in heaven. She got out her big Canon, the one that has the 300 mm lens and makes a quiet machine gun noise in burst mode, and took 250 photos over the next 10 minutes. None of the other boats saw the whales, but everyone was happy to make landfall after a gentle passage. 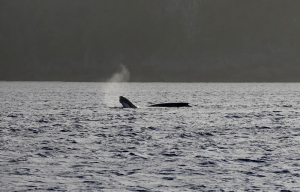 Since Tonga’s customs office is closed on Sunday, we all dropped anchors below Lotuma Island to hang out for a day. It was our most sheltered anchorage since perhaps the Tuomotus, and we were all greatful and a little amazed to be in still water for our post-passage naps. Post-nap, Sophie went into mothership mode. Will, Sarah, Ola, Nina, Johannes, and Caroline all rowed over for a dinner of fresh Mahi Mahi poached in butter (thanks Ola) washed down with drinks from cups filled with ice, which is apparently still a novelty for the Swedes.

Btw, Hazel is having a hard time deciding which of the men accompanying us she likes the most. First it was defintiely Will, then is seemed to transition over to Johannes, but now it is all Ola.

On Monday we pulled anchor and motored over to the commercial dock in Neiafu to clear customs. It took 2 hours, 4 departments, and a trip to the ATM but we finalized our paperwork and were granted official entry into the Kingdom. We spent Monday and Tuesday hanging out, doing laundry, eating banana splits and pizza in town, and marveling how sheltered the anchorage in Neiafu is. 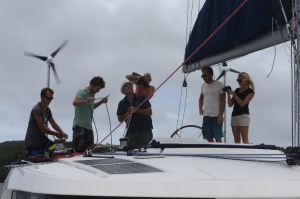 On Wednesday we had a lasagna/fishing/lets-go-sail-a-cat outing on Sophie. Will, Sarah, Ola, Nina, Johannes and Caroline all joined us on a cloudy day with 20-25 knot northeasterlies for a leisurely trip around the atoll. It seemed to start out as a fashion shoot, with 6 people pointing cameras at each other, clicking away. But then we transitioned to something much more important: fishing.We had 6 lines in the water, including a new pink hoochie I made for Hazel and a big squid Ola made that he calls “herdagerdaverda” which is Swedish for “tricky fellow”. Hazel’s pink Hoochie had 2 hits, but that was about it. We did have 3 squalls come through, and for me it was a blast to reef and tack Sophie with guys who had crossed the Pacific in boats ranging from 26 to 40 feet. Sophie uses the same basic physics their boats use but can sail at 10 knots with 2 reefs in the main, especially when there is no swell. There were a lot of smiles, and at one point it was raining so hard Johannes and I were more wet than if we were being hit full blast by a firehose underwater. For the ladies, it was a blast to sail through squalls while sitting below watching a Harry Potter movie on an HD flatscreen while eating chocolate cake.

As we were pulling into the harbor Hazel’s new lure caught a Travallie Jack, and at anchor everyone fell asleep watching a James Bond film after a dinnner consisting of drinks-with-ice, 3 bottles of Jenna’s dowry, a big Jenna lasagna, and a sugar cake Caroline had whipped up. 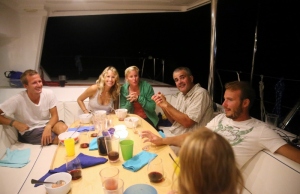 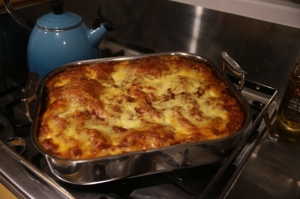 On Thursday, all we did was spend the day swimming with a humpback whale and her newborn baby for four hours. Words can’t accurately capture the experience. 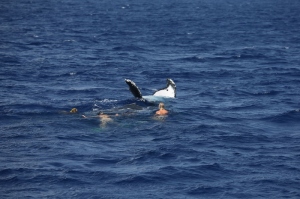 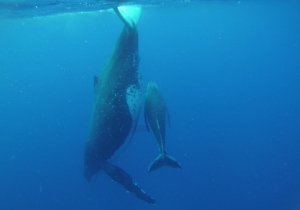 It’s Friday. There’s no wind but it is dumping rain. We need to go into town and run some errands, then we will leave Neiafu and head 150 miles south to meet our friends the Fells at the airport at Tongatapu. As great as this past week was, next 3 weeks are going to be even better. We’ve even selected the uninhabited island with a pristine beach where we will hang out with them. 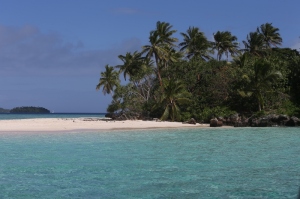 For 3 weeks. It’s 2 miles from where we swam with the whales, and I spotted a Wahoo jumping after reef fish 10 meters from shore.

Have I mentioned lately how blessed we are to be on this trip?