Jenna and Elizabeth decided they would spend Monday with the three girls making jewelry out of seashells. We’ve been anchored in Port Maurelle for the last couple of days, and they spent some time over the weekend collecting a nice variety from the local beach here. The Swedish navy left on Saturday for Fiji. The weather forecast called for a cloudy day with light to moderate wind and the occasional rain shower. Overall it looked to be a nice quiet day on Sophie with the girls focused on quiet and creative art projects.

My emphasis here is on the word “quiet”, because things can get a little loud around here with all of the kids running around.

The boys, on the other hand, decided to spend the day fishing. We chartered a boat skippered by an Oklahoman named Paul who’s been fishing Tonga for 50 years and looks like Robert Shaw in in the film Jaws. Over the course of the day we caught five ahi Mahi, a 30 pound spanish mackerel, and had a 250 pound marlin airborn within 30 feet of the boat. It was a spectacular day on the water, a day that Steve and I will never forget.

This is the story of that trip.

Paul arrived in Port Maurelle at 9:00 in the morning on his boat the Dora Malia to pick us up from Sophie. For crew he had a kiwi named Dave who’s been fishing Tonga for 20 years. Dave lives on his sailboat with his wife and spends half the year in Christchurch and half the year in Tonga and both halfs of the year fishing. He holds a bunch of New Zealand and world records after discovering tuna in places down in New Zealanad where no one knew they existed. 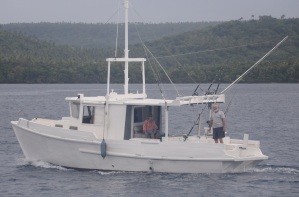 Paul had the Dora Malia built in Tonga in 1987. It was a 35 foot commercial fishing boat built from local wood and named after his daughter. For power it had a 50 horsepower Cummins diesel with 20,000 hours on it.  It has 2 ice boxes in the hold, a small pilot house and a covered work area out back. It is now rigged for sportsfishing with outriggers, rod holders and a plywood fighting chair. We were told he paints it every year. It cuts through the swell like a tank on tracks. We couldn’t have asked for a better ride. 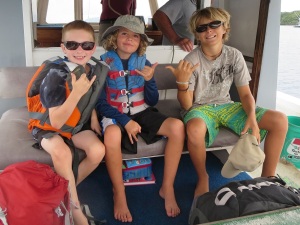 For guests there were me and Steve plus Leo, Steve’s son Michael and our new friend Oskar, a 13 year-old South African boy off the yacht Xanadu. He’s kind of a cocky little kid — when we asked him if he was interested in joining us on the fishing trip, he said he’d love to but warned us that he was lucky and that his line would get all the hits. But he is also a patient and friendly kid who does well hanging out with all of the much younger children in our extended crew, and we were happy to have him along.

Once we left Port Maurelle, Paul presented us with a choice. We could head south and try our hand at wahoo, sailfish and “stuff like that”, or we could head west and try our hand at marlin and maybe mahi mahi. Well, I had seen all of the other local sportfishers heading south that morning, and the forecast was for a southeasterly wind and swell, so if we went west we’d have fewer boats competing with us and would be in the lee of the island for a smoother ride. Plus Steve and I wanted a marlin.

So we decided to go west.

The Dora Malia chugs along at 7 knots, and within an hour we were out in the fishing grounds and 10 minutes later we had our first mahi mahi in the boat. It all seemed so simple and straighforward. We were trolling around something called a “Fish Attraction Device” or “FAD”, which is a fancy name for a string of buoys anchored in 1,300 meters of water. There are three of them off of Va’Vau’s west coast. We trolled right past the North FAD with 4 lines in the water, saw a flash of blue behind us, and within a minute had our first fish in the boat.

For me, the cool thing about this first fish was that Paul and Dave, with 80 years of combined sportfishing experience between them, get just as excited as me and Steve do when a fish hits one of our lines. It is a universal and magic surge of excitement that apparently never goes away. And these two guys had somehow figured out a way to structure their lives around moments like these. They are obviously doing something right.

We continued to troll around the FAD, and within 20 minutes landed another mahi mahi. Steve got this one into the boat, and once again Dave cleaned it up and tossed it into the ice box.

At this point Leo yelled out “We’ve got some great mahis on the boat!”, and Dave turned to him, grinned, and said “Leo, ‘mahi’ is the Tongan word for ‘Lady’s panties”, you really need to call the fish by their proper name!”

Throughout the day Paul and Dave got a kick out of the boys and enjoyed their company very much. The fact that we were on a fishing charter and had 2 fish in the box within the first hour didn’t hurt.

So we were now trolling north of the FAD and all of a sudden Paul get a crazy look on his face and yells “Here comes a marlin!” At that exact moment one of the reels explodes with line running out. Paul tells everyone to remain calm, and we all watch the reel run. Steve got out his camera and got a really nice shot. 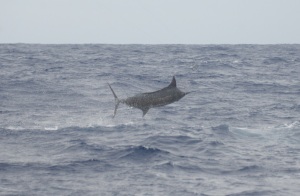 We lost the fish after a minute, but the surge of shared adrenalin across guest and crew was worth way more than the cost of the entire day’s charter. Later on Paul and Dave thought Steve’s photos were some of the best they’ve ever seen from their boat and asked for copies.

We worked our way down to the middle FAD and landed another mahi mahi around 1:00 in the afternoon. We then headed back north, spotted some frigate birds and landed mahi mahis four and five by 4:00 PM. 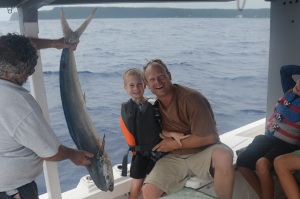 At this point Paul decided we should head inshore and troll right along the rocky cliffs of the island to see if we could land a wahoo or a tuna. There are caves all along the cliffs here, and some of our friends have dived them, seeing lots of nice gamefish right next to the rock. So we tried our hand trolling 30 feet from the rock walls, using a couple of different lures for the inshore stuff.

Leo was sitting up in the pilothouse with Paul, discussing the different fish we were spotting on the fishfinder. There was one last outcropping we were going to troll just 2 miles away from Sophie, and Leo told Paul “I bet we are going to get a fish right here.” At that moment I was sitting in the fighting chair, and all of a sudden “BOOM” … a reel right next to me suddenly burst with a big hit. 200 meters of line ran off in about 4 seconds. It took about 10 minutes for us to land our last fish, a 30 pound spanish mackerel.

Five mahi mahis, one spanish mackeral and some amazing marlin photos. Not a bad way to spend a day while the girls are off making jewelry. It turns out that when we returned to Sophie that no jewelry was actually made, but there were two loaves of bread in the oven (which in my view was better than having shellfish jewelry waiting for me). We kept 2 of the mahis 🙂 plus the mackerel, which we ate for dinner. It tasted similar to wahoo, with white firm meat and a high oil content. Totally delicious. And our freezer is now once again full of fish.

Have I mentioned lately how lucky we are to be on this trip, especially when we have the opportunity to share it with friends? 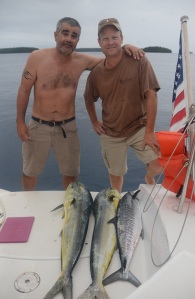 4 thoughts on “Arts and Crafts Day Making Jewelry From Seashells”