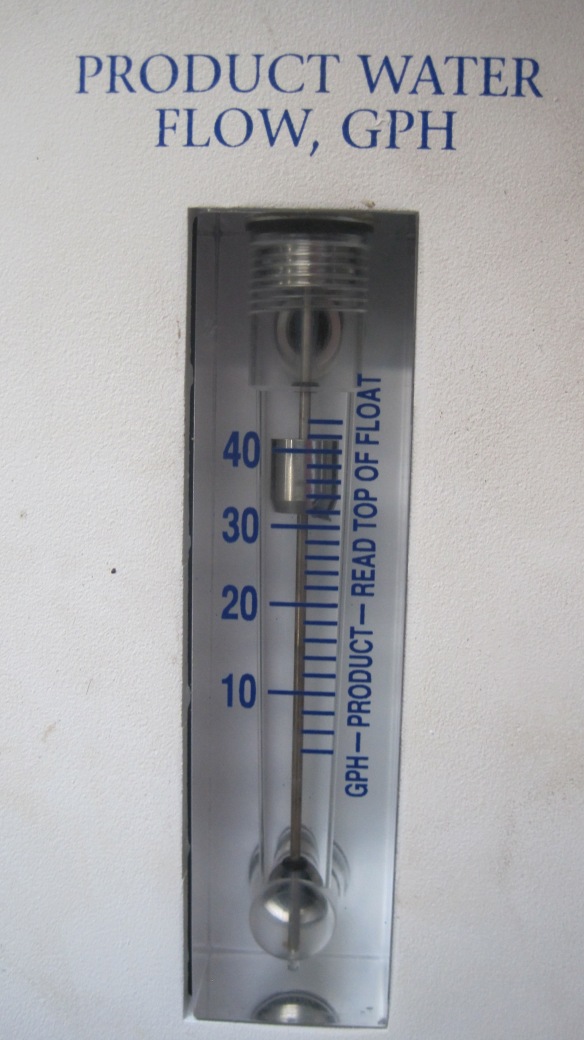 This is the happy sight that greeted me mid-afternoon today, a gauge indicating that our water maker was producing 42 gallons of sweet, tasty water per hour, a 75% increase over the machine’s throughput before it broke down 15 days ago.

This wound up being the longest, most complex repair job we’ve done to date on Sophie. Needless to say, I was an extremely happy man this afternoon.

As I have mentioned in previous posts, the culprit behind the machine’s failure was this little black box, manufactured from white polycarbonate, called an “Energy Transfer Device (or “ETD”). It takes a stream of water coming out of a pump at 150 Pounds per Square Inch (PSI) and increases it to 650 PSI, which is enough force to strip the salt from salt water as the water is pushed through a special type of membrane. The good thing about this ETD approach is that it enables a cruising family to make water on their boat with a relatively low amount of power consumption. The bad thing is that it is a complicated design that is easily prone to failure and potentially quite expensive (or impossible) to repair. These are not good water maker design characteristics for a family that is about to embark on a 4,500 mile passage across some remote cruising grounds.

This last week we met a family that is cruising across the Pacific, and they had gone through five (5!) Sea Recovery water maker ETDs before they decided to ditch the design and head in another direction.

Jenna and I decided that after 2 ETDs we were ready to move on. Chris Dent, the Kiwi who installed our most recent ETD in February, suggested we redesign out water maker by replacing the ETD with a powerful pump that can push the seawater at a high pressure directly into the membrane, eliminating the need for a fancy and complicated set of pressure-increasing valves. It turns out that this big pump/simple design approach is what most boats out here do for their water makers. Since Sophie already has a 9kw diesel generator, we had the power plant to support this big pump approach.

Chris was very cool and helpful and gave us a credit on the ETD we bought from him in February and then shipped up to Fiji a 2.5 horsepower high pressure pump, a new feed pump to supply water to the high pressure pump, along with some new sensors, coils, and valves. He also provided some design guidance on how to modify our existing Sea Recovery unit to support this new approach.

One of the challenges we faced is that the new high pressure pump has to be located right next to the membrane and the watermaker, and both of these are mounted behind Sophie’s starboard engine on a special shelf and mount under the aft transom steps. 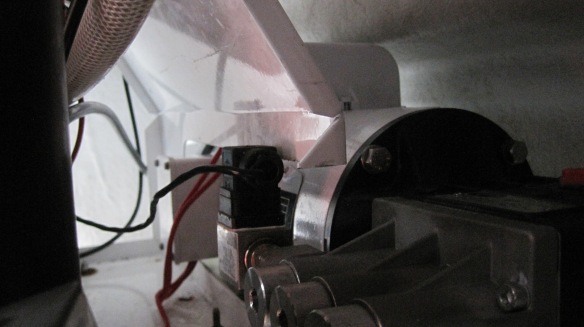 So we removed the ETD from the old water maker housing, moved the housing 6 inches forward on the shelf under the transom steps, and then mounted the new high pressure pump (which weighs about fifty pounds) on the back end of the shelf. To get it all to fit, I had to take a Dremel with a ceramic metal cutting blade and cut a hole in the back of the old water maker housing in order to create space for the new pump. I had to do all of this with my abdomen wedged under the shelf that is located under our transom steps.

Neil Towner, shown here with his lovely bride Wendy, was down there with me for a couple of days. He’s the Managing Director of Oceania Water Group in Fiji and supports most of the desalinization plants at the big resort hotels here. Neil and I were crammed together doing bilge yoga poses in an area about the third the size of a Gemini space capsule trying to get all of this stuff installed. (And if you are encountering water maker problems in Fiji, don’t waste your time. HIRE HIM.)

Once we had everything mounted, it took us a while to get the wiring right. By using the old Sea Recovery’s electronics, we were adopting an approach where both pumps would try to start at the same time. This required too large on an electrical load from Sophie, and at various points during our testing we brought down our AC circuit breaker, our inverter, and even our generator. 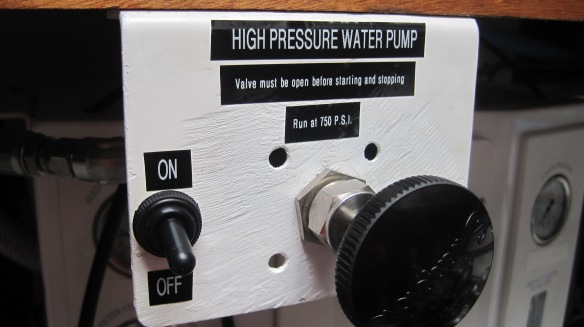 So we decided to deploy a staged approach where we turn on the water maker and feed pump first and THEN turn on the high pressure pump. I even installed a switch to do so. Problem solved. We also installed a manual valve that enables us to directly manipulate the amount of water the high pressure pump pushes through the membrane. At 750 PSI we were getting the 42 gallons per hour depicted above.

This was a really hard problem for us to solve. I feel bad for our friends Cathy and Melissa who had to endure a water-deprived Sophie Adventure Cruise, and for my daughter Sara and cousin Birgit who both had to change their travel plans due to our delayed departure for Vanuatu.

But all’s well that ends well. And the best thing about all of this?

Have I told you lately how lucky we are?

4 thoughts on “We Fixed the Watermaker!”