We spent 7 wonderful weeks in Raja Ampat. It is an ocean paradise that is off the beaten path typically taken by cruising boats moving beyond the Pacific. We’ve been told that only 20 boats a year visit this area!
Jenna and I found it hard to find information on anchorages in Raja Ampat, so we decided to pull together a blog post that documents where we stayed over the last 2 months. We hope to help our friends following us down this path in the years to come. We also want to thank Brick House, Totem, Nalukai, Ocelot, and everyone else who shared information with us. We couldn’t have done this trip without your help.
Sorong

Sorong is not pretty, but it has excellent wifi and good provisioning at the Saga Supermarket. Victor Sapura (victor.s@intracodharma.com) is your man here and can help with diesel, propane, beer, and locating parts. We anchored at 00.53.172S, 131.15.600E in 70 feet of mud and plastic. This is near where the liveaboards (local dive boats for tourists) anchor and is close to the pier that the fishermen use. You can leave your dinghy at the pier when you head into town, but it is best to do so after 10:00 AM. The local fishing fleet brings their catch in during the early morning and the pier becomes quite crowded.
Yangello

This is a very sheltered spot in the mangroves on a little channel between Yangello Island and the southwest tip of Gam. The channel itself is deep and navigable. We tied up at 00.30.722S, 130.27.315E using multiple long lines off our bow and stern. Excellent snorkeling along the channel, and the green water snorkeling in the mangroves is a unique experience. Around the corner is a small beach with a beach hut where kids can play and where grownups can make a beach fire. Excellent spot where we spent several nights.
Pef

This is a small island 5 miles north of Yangello and is owned by the Raja4Divers resort. The Navionics chart shows Pef as being a single round island, but there is actually a deep lagoon in the middle of the island, and this lagoon has 2 moorings maintained by the resort.  The moorings are at 00.26.556S, 130.26.625E, and a good waypoint for making your turn into the lagoon is 00.26.822S, 130.27.006E. The resort charges ~$20 US per adult for using the mooring, but in return encourage you to use their facilities (wifi, laundry, snacks, happy hour with complimentary beer.) We were short of cash (very few working ATMs in the area) and spent 3 nights there in return for taking the resort’s guests and staff out on a sunset sail. The kids enjoyed swimming in the lagoon until we saw the crocodile that was caught nearby. Jenna and Mellia had one of their best paddleboards ever, navigating the spectacular gumdrop islands in the lagoon. It was a great stop, and the people at the resort were quite friendly to cruisers.
Wayag 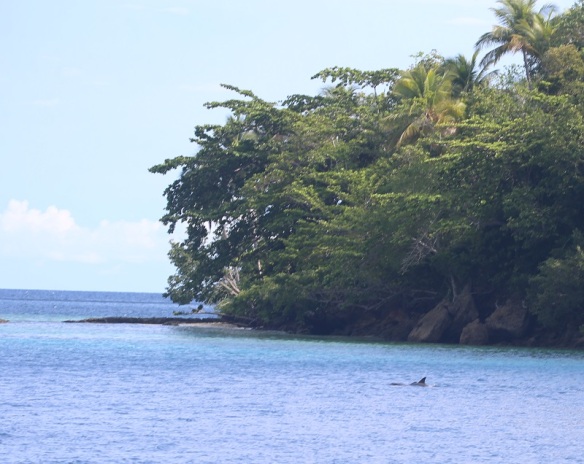 We spent multiple nights anchored off Friwin at 00.28.142S, 130.41.645E. There is a current here, but there is good holding and some excellent snorkeling around Firwin itself and around some little rocks to the north. There is also a strong mobile data signal here. Great spot.
Waisai

We never spent the night at Waisai, but stopped here multiple times to provision and collect passengers. It is a new town being built by the government to support the tourist industry in Raja Ampat and is NOT the Waisai that appears on the Navionics chart. This Waisai is spread out over 3 bays along the southwest coast of Waiego. The western bay (00.25.982S, 130.48.075E) contains the ferry terminal and little else. There is no ATM and no provisioning. There is a floating dock where you can tie up a dinghy on the east end of the bay. It is linked to the ferry terminal by a 300 meter long covered pier. Make sure you follow the channel markers as you head into this floating dock! The ferry terminal itself is a concrete pier. I was able to pick up a guest and his luggage/supplies cache there, but it was a little hectic. The middle bay of Waisai (00.25.831S, 13.49.422E) is where we anchored when we stopped there. It’s the location of the town and is on the mouth of a river. Be careful of the river bar at low tide. We tied the dinghy up at a concrete pier with black and yellow stripes located at the mouth of the river on the left hand side. Next to this pier is a shack that will sell gasoline and diesel. Then there are 4 blocks of small shops selling hardware and dry groceries. There is an ATM that worked once and didn’t work once. The biggest store is located in the Raja Ampat Hotel. They had bread along with frozen beef and chicken. Waisai’s eastern bay is where the public market is located. I don’t have a waypoint but it was a 4 minute dinghy ride from our anchorage off the main town. You can see a line of blue-roofed buildings behind the mangroves on the left side of bay, and there is a small wooden pier where you can tie your dinghy. Look out for the shallow coral approach at low tide. The produce in the market is excellent, better than what we saw in Sorong. The also have eggs but no bread. No ATM. But great provisioning.
“Christmas Bay”

After Waisai, we joined 6 other boats for Christmas in the big bay that opens up on the southern side of Gam. I believe it is called Besir. We now call it Christmas. Our anchorage was at 00.30.444S, 130.33.690E in 60 feet of water. We entered the harbor via the easternmost entrance. Be careful to head a good way into the bay before turning towards the anchorage in order to avoid a reef that extends northeast from one of the islands. This anchorage was selected because it was large enough to hold a small holiday fleet. There was no beach or coral nearby, but there was great swimming among the boats. There was also good paddleboarding and kayaking around the islands at the mouth of the bay. I saw some LARGE fish there while snorkeling along the abandoned pier on the west side of one of these islands.
Kabui Pass 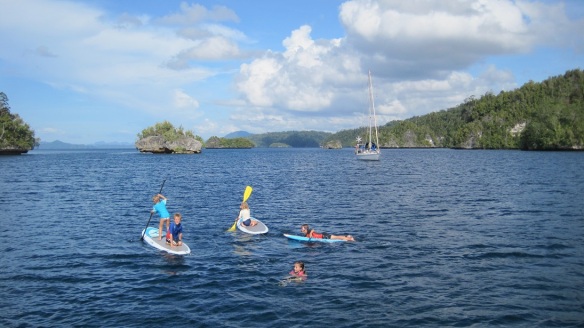 This excellent anchorage is located at 00.25.380S, 130.34.218E at the eastern mouth of the narrow channel that separates Gam from Waiego. We approached from the northeast and anchored among some gumdrop islands in 60 feet of water. The pass offers excellent drift snorkeling that is best done near slack tide to avoid strong currents. Beautiful spot.
Eastern Batanta
We spent a night in this unnamed anchorage as a convenient stopover between Waisai and Sorong. 00.46.485S, 130.53.301E. It was surrounded by mangroves and seemed to collect garbage carried by the currents flowing out from Sorong. Not a pleasant spot but it helped us cut a long passage into two shorter ones.
Teleme

This is an excellent stopover on the Selat Sele for boats heading south from Sorong on their way to Misool. There was a strong south setting current in the channel and a 10 knot opposing southwesterly breeze, so we motored up to 01.22.911S, 130.59.864E to avoid the breeze. The entire channel was deep, and the anchor set quickly in the mud. Nice stop.
Mustika

We anchored in this exposed area off the east coast of Misool for 2 nights in order to celebrate a birthday for one of the Per Ardua kids without being underway. 01.53.472S, 130.26.905E. I think it offers more protection in the southeast monsoon than in the northerlies we were getting. We felt we were dragging most of the time and had to set our anchor twice. At one point I was swept away by the current while attempting to swim the 20 meters between Per Ardua and Sophie. Peter tried to rescue me in their inflatable kayak but the current was too strong. Jenna had to lower the dinghy in order to retrieve me and get me baclk onto Sophie. Don’t go here.
But DO put your trolling lines out after you depart Teleme. Maybe you, too, can pose for some gunshots.
Balbulol 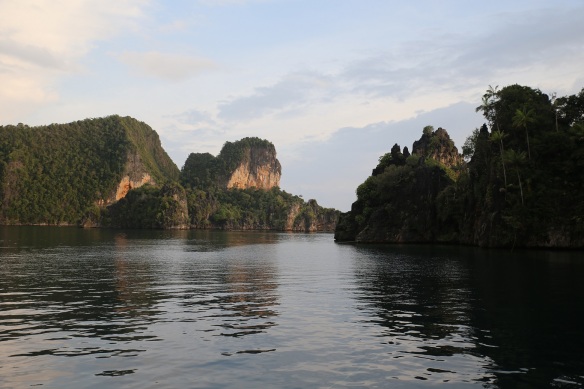 GO HERE INSTEAD! This anchorage ranks right up there with Wayag as our best stop in Raja Ampat. We stayed here for a week with 2 other boats, spending 3-5 hours a day snorkeling the coral walls. Our best drift snorkeling ever. It’s a small protected lagoon with limestone cliffs that ascend 30-100 meters into the air. These cliffs descend another 30 meters underwater. We used long lines to tie bow and stern to opposite cliffs. 02.01.494S, 130.40.427E. Tens of thousands of fish. Spectacular coral. A very large poisonous snake! A scorpion fish! Glow-in-the-dark jellyfish! Completely protected. No town, but there was a small fishing camp on a beach around the corner. The fishermen pretty much left us alone. We could have stayed here forever.
Misool Eco Resort
As I mentioned in our last post, Per Ardua’s mooring line separated 2 hours after they stopped here. Several other moorings have failed here in the last few months. We spent a nervous night on the resort’s last remaining mooring at 02.14.791S, 130.33.478E.  Other cruisers had a good experience here, and there apparently are some deep anchorages nearby. The people at the resort were quite friendly, but we can’t recommend stopping here until they fix their moorings.
So that’s it.13 stops from November through January. Some of the best cruising of our lives. Can’t you just tell how happy we all are?

2 thoughts on “Anchorages in Raja Ampat”