Jenna left Sophie two weeks ago for a trip back to the United States. She went there to attend a high school reunion, visit with family, and participate in her cousin Eric’s wedding. Two weeks is a long time to be away from Sophie, and it’s the longest time we’ve been apart since we got married. 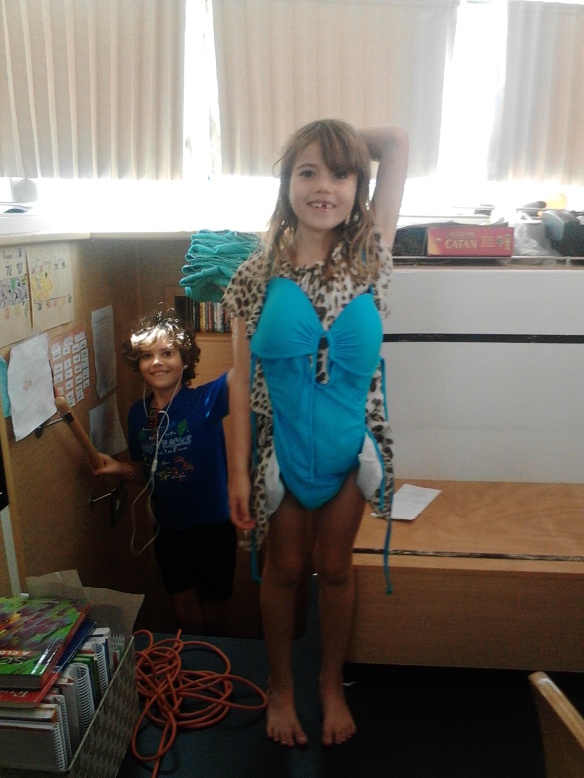 How on earth was I going to manage the kids and the boat for two whole weeks without some adult assistance? As soon as Jenna left, Hazel went through Jenna’s wardrobe and modeled all of her clothing. That was a lot of fun, but it only killed two hours. I suggested hiring a live-aboard Thai nanny for a couple of weeks, but somehow that got ruled out.

Fortunately, Stephen Utzschneider came to my rescue. Stephen is the oldest of my 30 or so nieces and nephews, and he agreed to take one for the team, fly out to Phuket, and be my wingman for two weeks, helping out with the dishes, laundry, cleaning, schoolwork, and all the other things guys do on a boat in Thailand when the wife is out of town for a couple of weeks.

So why is Stephen #Winning? Well, Stephen has a younger brother named Daniel, and Daniel will be joining us in Phuket for a visit next month. Like most brothers, Stephen and Daniel occasionally compete with each other, and they are apparently competing over who is going to have more fun on their Phuket Sophie Adventure Cruise.

But Jenna is not here, and her absence raises an interesting philosophical question: does a visiting nephew have more fun on Sophie in Thailand when Jenna is on board, or when she is gone? This is something Stephen and I have discussed over breakfast beers during the last week. On the one hand, Jenna is among the top five most fun people in the world and has partnered with me on this epic, globe-circling adventure cruise. On the other hand, there is breakfast beer.

Stephen and I have concluded that just like there are multiple types of intelligence, there are multiple types of fun. Stephen vs. Daniel will not be a linear comparison. And I will let all of you vote with your comments next month after Daniel’s visit on whom you think had more fun. But since Daniel has not yet stepped onto the playing field, I have to say that Stephen is winning. He’s off to a great start. 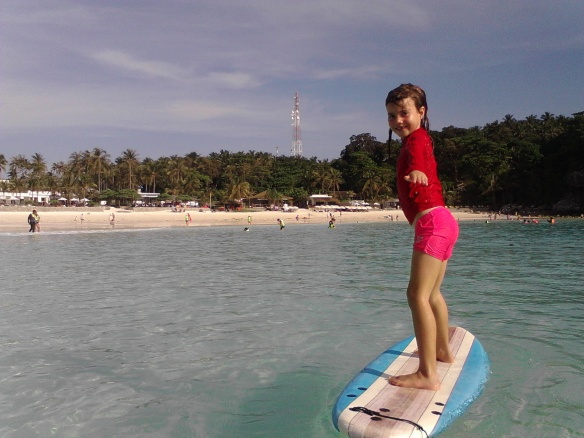 Stephen was greeted with bright sunshine and a slight easterly breeze on his first morning on Sophie, so we left the Ao Po Grand Marina and headed south to Koh Racha Yai, an island 14 miles south of Phuket. Our initial destination was “Beer Beach”, a small enclave on the northeast side of the island. But the seasonal monsoon had disappeared, so we picked up a mooring in the bay on the west side of the island and enjoyed one of the nicest silica beaches in Thailand. Hazel got her surf on, and we all got to snorkel the reefs.

The bay had a nice restaurant on a hill directly overlooking the beach. Stephen and I spent hours there discussing who was going to have more fun while we watched the kiddies play in the surf. We also made friends with a couple from Australia, who observed (after seeing the kids and me) that my wife must be very beautiful, because Leo and Hazel certainly didn’t get their looks from me.

I love Ozzies. I really do. 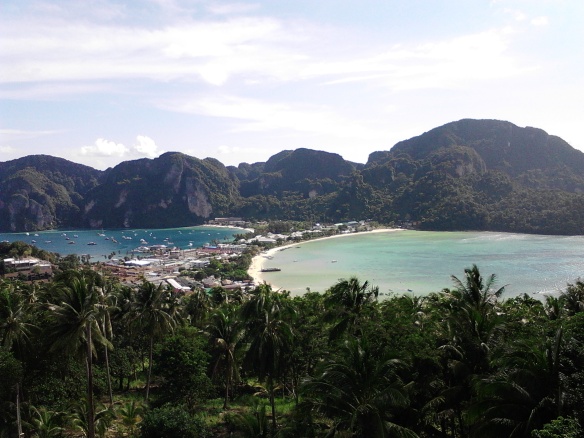 After Rocha, we headed east to Phi Phi Don, where we grabbed a mooring in Ton Sai Bay. Sophie is one of the boats on the left side of the photo. This island was badly hit by the 2004 tsunami, which came in on both sides of the isthmus, destroying every building in town and killing thousands of people. Thankfully, they have rebuilt. The bay to the right has an excellent backpacker beach club scene, and we spent hours there hanging out, eating pizza and playing board games.

After a couple of days of this, we decided to head around the corner to Laem Tong Beach, the home of Jasmin restaurant and Peter, the Scottish dude whom we had met before. First we pulled into Maya Bay on Phi Phi Le, but the strong westerly wind made the bay untenable for Sophie. We grabbed a mooring off of Jasmin, but a 70 foot fishing boat kicked us off the mooring. We dropped a hook with a lot of rode, which was a good thing, because an hour later a squall with 50 knot winds came though and kicked the widdershins out of us. That fishing boat was joined by another 40 foot boat, and they both dragged the mooring for over a mile during the squall, missing Sophie by 100 feet.

But the weather cleared, and we were able to head into Jasmin for dinner. The kiddies enjoyed playing on the beach.

The next night we helped Jasmin (above) and Peter evaluate whether or not to add cheeseburgers and ribs to their menu. The samples were excellent. I know, I know, it’s a lot of work. But when you are called, you need t do your job. Later that night I took over the stereo and played DJ for their 100 guests. I tried to only play bands from Scotland.The Proclaimers even got me a hug from Peter.

Aster a few days of this, we decided to head over to Krabi, a city of 50,000 on the Thai mainland. We were low on produce and beer and needed to stock up. It was a great decision. I love love love Krabi; it’s one of my favorite stops in the last year. Why? It has a cute, clean, safe marina that hosts karaoke at night. 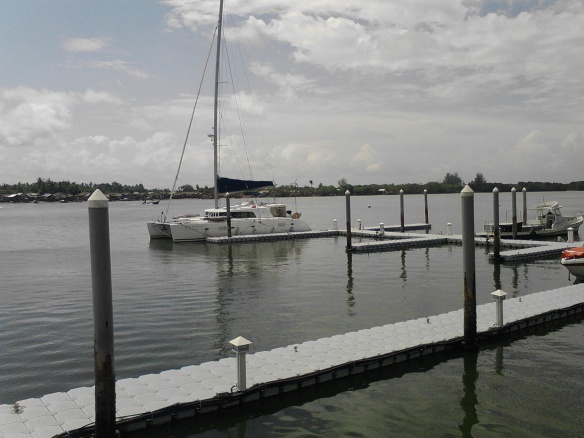 Krabi itself is a real Asian city with a little bit of backpacker tourism thrown in. We were able to take Stephen to food stalls, wet markets, and crowded city streets. 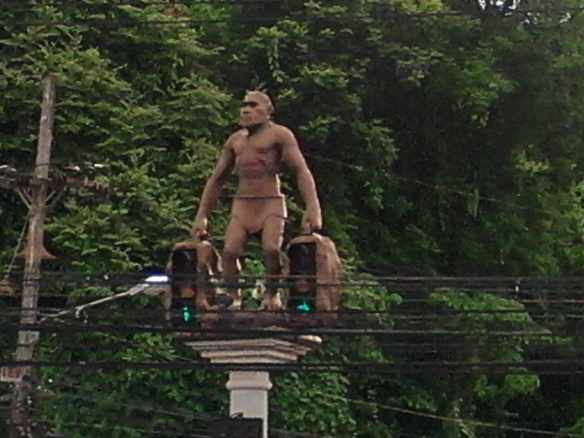 They even had public art that I can only describe as Planet of the Apes traffic signals. 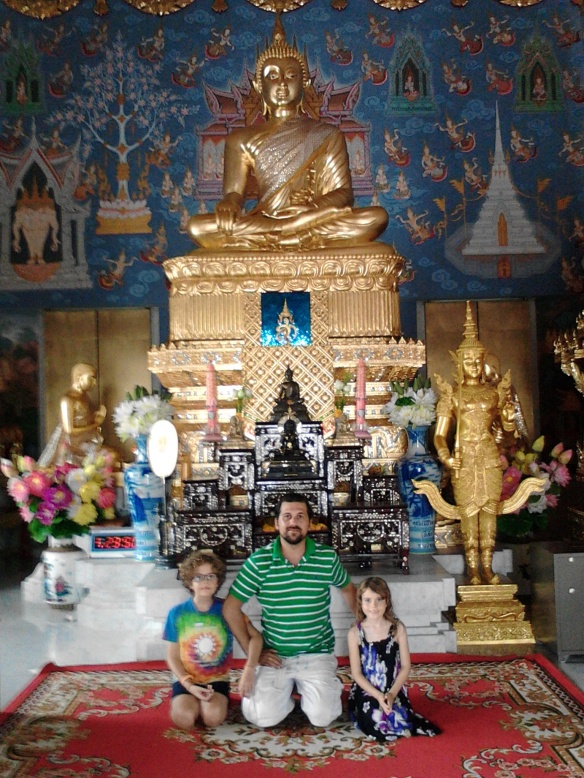 They have a nice Buddhist temple on a hill. 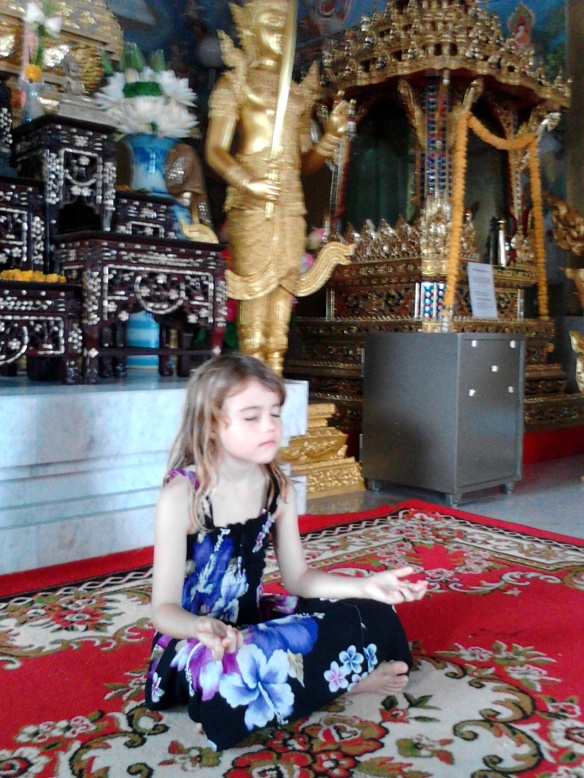 While there, Hazel contemplated her inner warrior goddess. She says that meditation helps her win at Settlers of Catan. It must work, because she has been crushing us.

Meanwhile, Stephen has been an excellent influence on Leo. They go off and have their bro talks, and afterwards Leo returns and asks “Dad, what can I do to help?” It’s really nice to watch them interact, especially when Stephen helps Leo with his Sophie pull ups.

We will definitely return again to Krabi.

Right now we are anchored off Koh Dam Hok. It has a beach bar scene to the left, and a coral wall on that island to the right. We’ll stay here for 2 nights, then head back to Ao Po Grand to collect Jenna.

We miss her very much. The kids have worked hard at school despite all of the distractions. The boat is relatively clean. All of the machines are working. But it’s not the same boat without her. And Stephen stays with us for another week after Jenna returns. So this whole question of whether or not you have more fun on Sophie if Jenna is here, for Stephen, is irrelevant. For him, it’s an “and”, not an “or”.  He gets the best of both worlds.