What started as a calm and typical Sophie School day turned alarming when Leo ran up from his room screaming that there was a snake in his Lego bag!

Leo has a huge collection of Legos, and for the past couple months we had been storing his suitcase sized canvas Lego duffle bags in the generator compartment next to our bikes. During a short school break, Leo retrieved the biggest Lego bag and brought it to his room to play. As he unzipped the bag and reached in, he noticed a terrible smell, and then his hand touched something that wasn’t a Lego piece. At first he thought it was a toy snake, but then to his horror realized it was real! Real and big! Completely terrified, Leo ran upstairs to me and Hazel, screaming about the snake. Jamie was on shore running errands. Good times!

Our initial concern was whether the snake was alive or dead. As I comforted Leo, a flurry of thoughts rushed through my head. Several of our friends have experienced snake visits to their boats within the last few months. Vipers and pythons, oh my! What could be slithering around in his room? Then, I realized there was an overwhelming dead animal smell coming through the boat. Leo thought the snake was dead, but it took a minute for him to feel certain about this and I didn’t want to let him back in his room with a live snake. After peeking in to check that the snake was still motionless in the bag, Leo carried the duffel outside and dropped it on the deck.

The kids and I got a much better view in the sunlight. Definitely dead. It was still coiled up and I couldn’t tell how long it was, but this was not a little sea snake like the ones we’ve seen while swimming in the Pacific and Southeast Asia. The markings looked like a python to me. A python?!? In my child’s Lego bag!?! I felt sick.

Next, Leo thumbed through his army survival manual while I searched online. The closest matches were images of pythons and the other common snakes of Thailand looked quite different. Ok, python it is. But how did it get into the bag? How long was it in there? How did it get zipped in? Where did it come from? When did it slither onto Sophie? How many times had we been in the generator compartment during the last month? How many times had we lifted those Lego bags in and out of the compartment to get bikes out, access LPG bottles, do generator maintenance, etc.? Jamie can spends hours at a time in there working on the electronics or genet. Thank goodness Leo had been doing a big push on school this month and had taken a Lego break or chances are he might have opened that bag days earlier and… no, I can’t even.

On deck wasn’t far enough away from the smell, so we threw the bag onto the dock. When Jamie returned, he pulled the snake out using fishing pliers and we got our first look at the entire creature.

The snake was about five feet long and dried. It must have been in that bag for a while. There was a snakeskin in there too. We may have picked it up in Malaysia. Who knows? We have no idea exactly when or where the snake boarded Sophie or which one of us zipped it into the bag, or whether there was a small enough opening by the end of the zipper for it to get in but not back out. We were all pretty shaken from the thought of a snake crawling around our home, but very thankful we never saw the live version. Jamie was kind enough to dispose of it all. Leo is mourning the loss of half his Lego collection, but there was no way we were keeping any of it. We have also carefully inspected Sophie and believe there are no other snakes lurking. We feel quite relieved, but remain vigilant.

Our mood changed quickly following this unpleasant event, with the arrival of our nephew Danny that night. The kids love having another cousin visit, and we are back in prime cruising form with all the new upgrades on Sophie.

We started out with dinner at the same beach restaurant where we took Danny’s brother Stephen last month.

We even got a break from all the Sumatran smoke for Danny’s first day out on the water, with spectacular views across Phang Nga Bay. Leo winched the jib out manually for an afternoon sail.

That morning, Hazel had written a letter for school about Amelia Earhart and was thrilled when we sailed past the USNS Amelia Earhart anchored outside Chalong Harbor. A total coincidence, we had no idea it was there. Jamie hailed them on the radio to thank them for their service and share the story about Hazel’s project.

We stopped for the night around the corner and enjoyed a quick swim just before sunset.

The next morning, we motored to Racha, where we stopped for some snorkeling and hull cleaning. It’s hard to tell from the photos, but we only had about two miles visibility on the way from all the smoke in the air from the Sumatran fires. 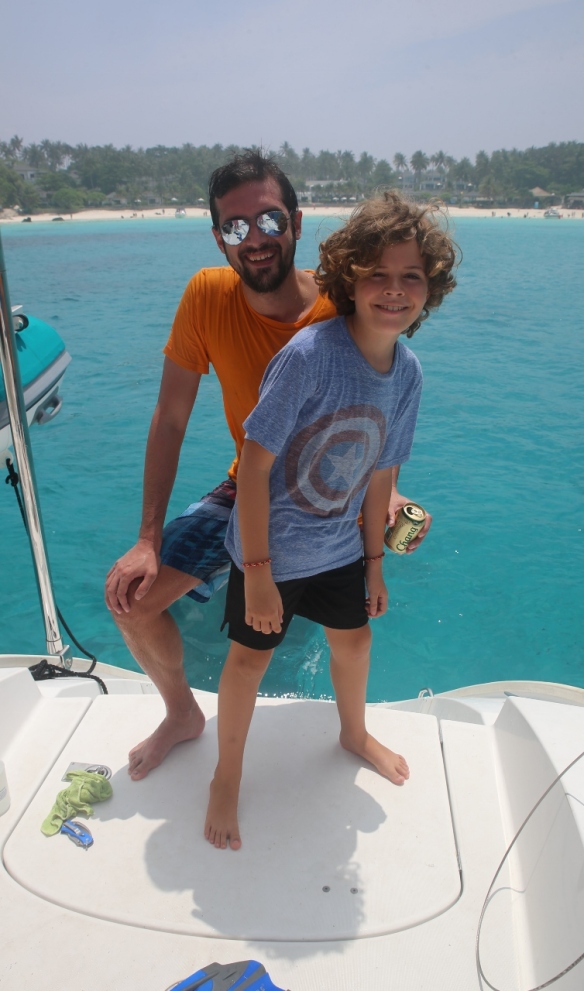 The beach bar at Racha had been torn down since Jamie and the kids were there with Stephen last month, and the wind was picking up from the west, so we decided to move to Beer Beach on the other side of the island. That turned out to be an overcrowded tourist boat day stop, so after a quick dinghy recon mission, we departed for Koh Phi Phi and dinner at Jasmine’s. On the way, Danny caught a big barracuda in the “Dandaman” Sea, our first large fish in a long time. 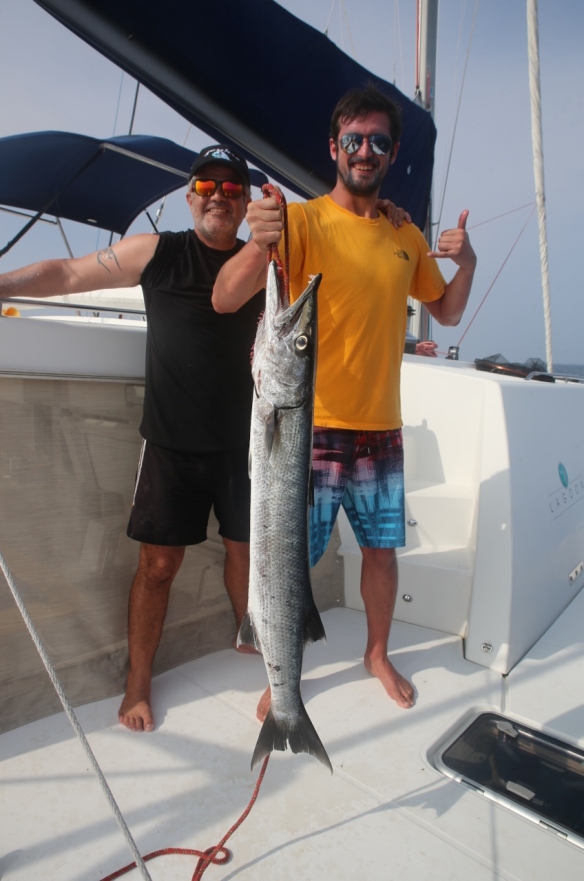 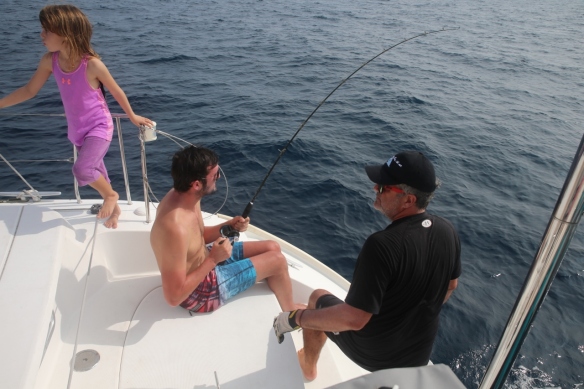 Mojitos, Thai food, pizza, Settlers of Catan, beaches, snorkeling, kayaking and lots of swimming and diving are on the menu this week, and there hasn’t been a snake in sight. We still aren’t feeling very motivated to play with Lego yet, but we do feel very lucky.