It has been almost a week since I returned from the U.S. back to Fiji. There has been a strong easterly blowing all week, which made us a little reluctant to depart the Savusavu area. Also, our friends Misti and Abbie were scheduled to leave on a plane from Savusavu yesterday, so we wound up spending the last 3 days back at anchor off the Cousteau resort.

I shouldn’t complain. We went swimming every day, we deployed the Relaxation Station V2, and we had one of our better dance parties on the eve of Misti and Abbie’s departure. Max, who spent some time on a collegiate swing dancing team, helped Hazel transform her skill at doing a yoga bridge into an outstanding dip.

Hazel then tried to teach Max some advanced moves she learned from the playgrounds of New Zealand, but I think they may still need a little work before Caroline and Alex’s Maine wedding in July.

Meanwhile, Misti stepped in and taught Leo that there are actually more dance moves than simply standing in the middle of the dance floor, karate chopping invisible assailants on either side of you. I often dream of fixing things with someone, but I am really glad Misti stepped in and started the process of fixing Leo’s approach to wedding dances. 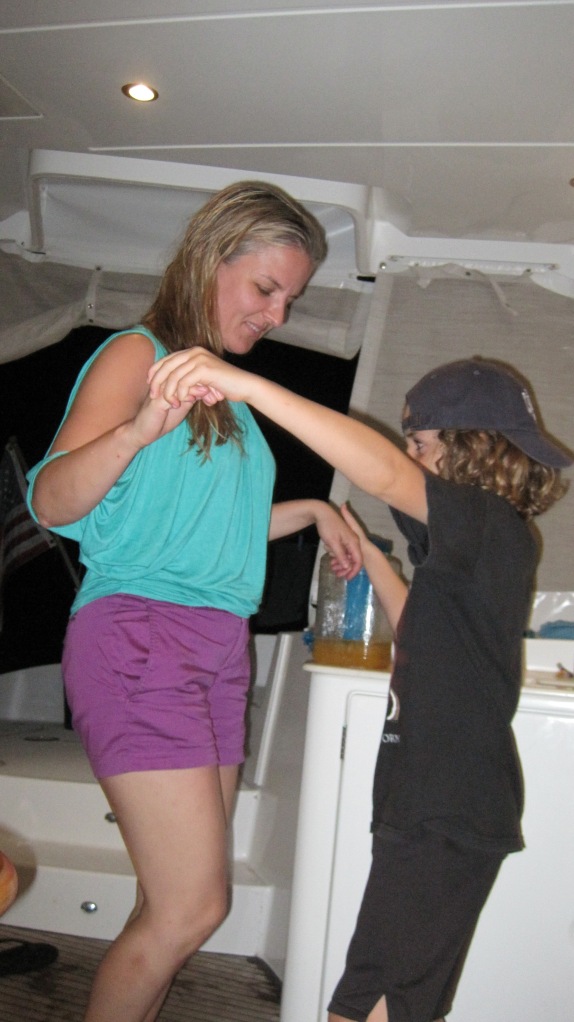 In case you are wondering, Leo is completely set for the dancing that will take place AFTER the reception.

But once again, I digress. I had planned to write a post about Sophie’s history of dance parties, a history that goes back six years, a history that even had Hazel asking me yesterday about exactly when we were getting our disco ball. But the events of my birthday, which is taking place today in Fiji, has given me much better things to write about.

Because when Jenna and I woke up this morning, we saw that there was no wind. We had assumed we would be heading west, with the strong easterly wind at our backs, towards a bay called Mbua and then on to the iguana sanctuary of Yadua. Our friends Jeff and Melody made it to Mbua last night, and they said there was nothing there except for a lot of wind and a large number of blue jellyfishes. Jenna and I had wanted to head east to the Lau Group since we arrived in Fiji a month ago, there was no wind this morning, so we looked at each other and said, basically at the same time, “Let’s go east”.

It was bouncy for the first hour but then smoothed out as we got inside the lee of Taveuni. We had 3 meat lines out along with the trolling rod, it was a beautiful sunny morning, and then Max and I saw a school of fish going nuts 200 meters a way. We saw one of them destroy one of our lures (goodbye, Cougar, we will miss you) and then a fish hit the lure on the rod. 10 minutes later, we had Sophie’s biggest mahi mahi ever on the boat.

What a birthday present! I fileted the fish and was in the process of vacuum sealing it’s chunks when the trolling rod exploded again with another fish hit!

This one was all Max’s. Jenna got some good airborne shots.

We had to use the gaff on both of the fish, and Max’s fish actually pulled the gaff from my hand as it dove under the boat. Good thing our friends on Muk Tuk in Nuku Hiva a year ago taught us to but a rope on the end of the gaff. 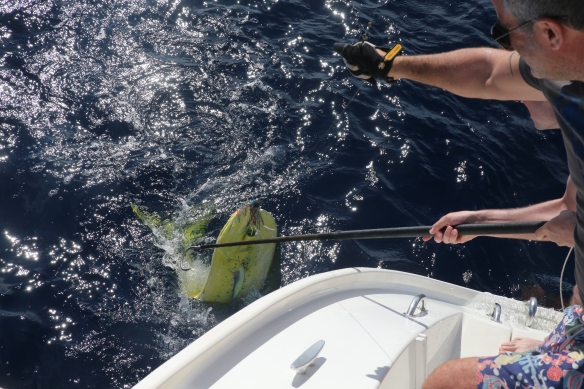 But the important thing is that we got Max’s Mahi Mahi into the boat, and we could get the father-son trophy shot.

There was enough room in the freezer to store 28 pounds of filets, and that was after setting 5 pounds aside for my birthday lunch and dinner.

And to think a week ago I was hanging out in Washington DC with friends I hadn’t seen in 30 years, and now I am back in the tropics on the other side of the world surrounded by family and connected with friends, doing what I love. I am wicked lucky. 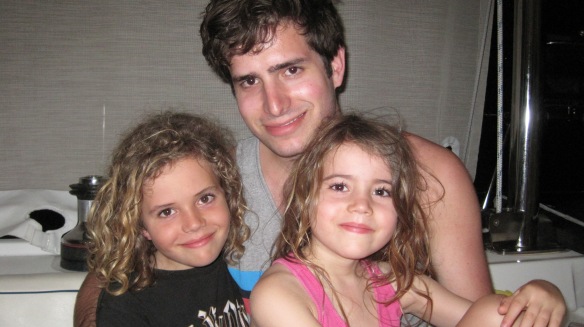