I am currently writing while underway from Monuriki Island, where the movie Castaway was filmed, back to Malolo Lailai. In addition to Max, my sister Julie and her husband Silas are visiting this week so Sophie is a full and happy boat.

Over the last couple weeks we cruised northern Fiji and experienced village life. Our first stop was Rambi Island, inhabited by descendants of people from Kiribati. We stayed a few days in Albert Cove, which had a great beach and beautiful reef. We saw so many fish jumping out of the water. Even the dolphin stopped by to herd their lunch against the inside of the reef. 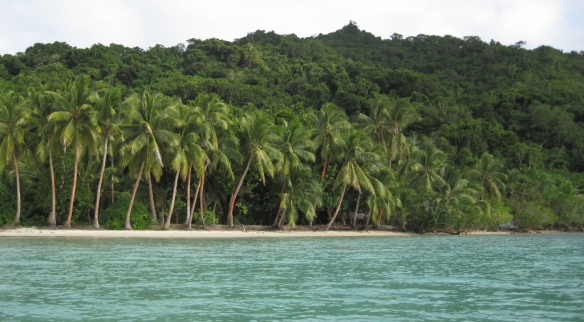 When we left Rambi, we had a perfect day for sailing to Mitangi, a small uninhabited island off the coast of Taveuni. Snorkeling was fabulous and I managed to remember my underwater camera this time. 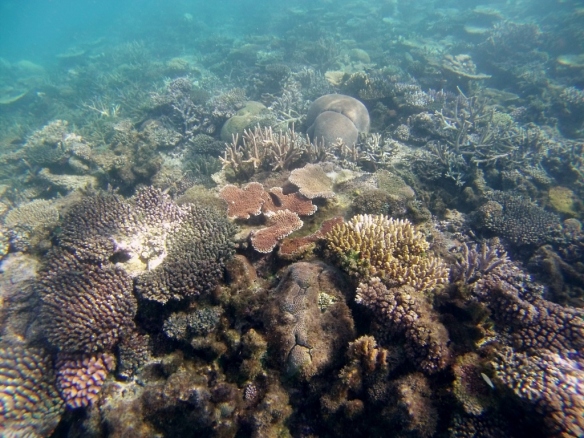 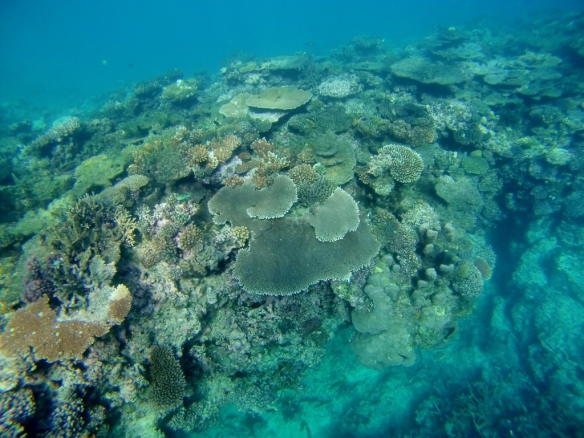 We had hoped to stay overnight at Mitangi, but by the time I finished snorkeling the wind had shifted to the north and rollers were coming through the anchorage. We made a quick late afternoon decision to motor to Qamea before dark. This turned out to be a great call. We dropped the anchor at sunset in a totally protected and calm anchorage. Three other boats there left for the Lau group at first light, so we ended up being the only boat in the bay for four days. 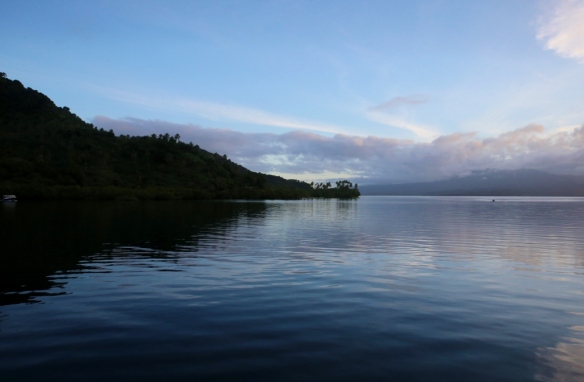 In the morning, we dinghied in to the settlement for a sevu sevu ceremony with Moses, the chief, and met a few other people from the village.

The chief and his family welcomed us with open arms into the village and were extremely generous. They have no electricity other than a few solar chargers, and they are still waiting for government money to finish rebuilding from damage sustained in 2009 from Cyclone Mick that destroyed almost every structure on the island. Leo and Hazel had tons of fun playing with all of the kids, dogs and one of the pet pigs that had jumped over the fence of its pig pen and was running loose.

A few local kids paddled out to Sophie to play with the kids. They loved the trampolines and jumping off the bows. The boys were so excited by our library on board that we ended up with five kids reading books in the fly bridge for a solid hour after lunch. 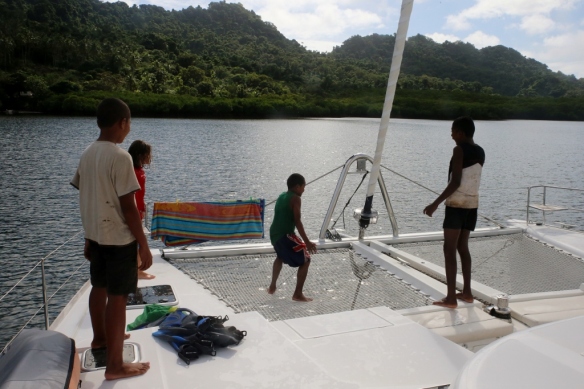 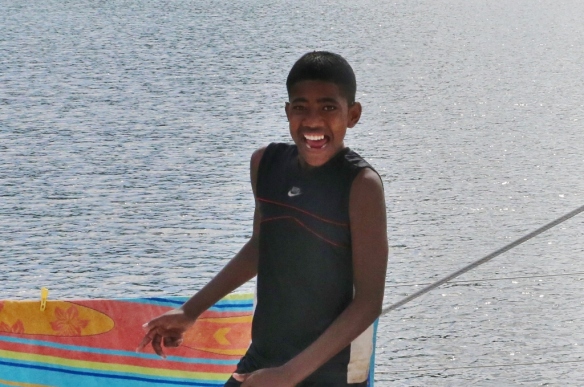 The next day more boys paddled out to Sophie to swim with the kids, but we were in the middle of Sophie School and it was raining, so we asked them to come back in the afternoon. A little while later Jamie went down to our room to straighten up and realized they had been under the boat the whole time, hiding from the pouring rain. Smart kids. We gave them chocolate chip cookies.

Moses, the chief, is also the pastor of the village. On Sunday he invited us to church followed by lunch with his family. The kids went to Sunday school and learned hymns in Fijian, which they sang during the service. 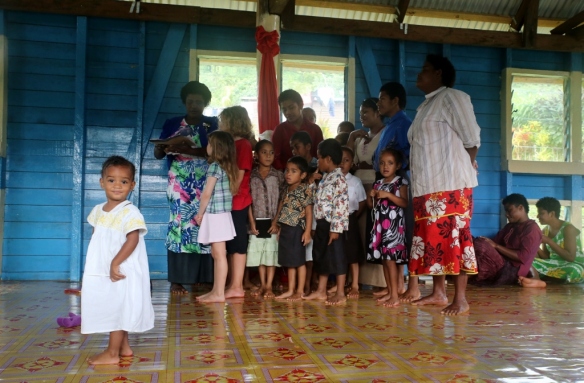 Singing during the church service. 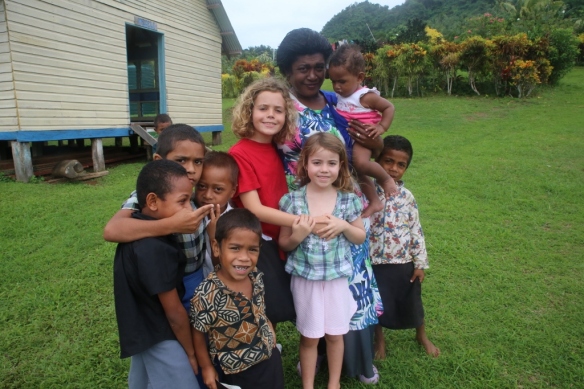 What an amazing meal we ate! Here is “Mama” preparing Bele leaves. Every dish was delicious. We think they fished all day Saturday to catch something big enough to host all of us. Their kindness and generosity were overwhelming. 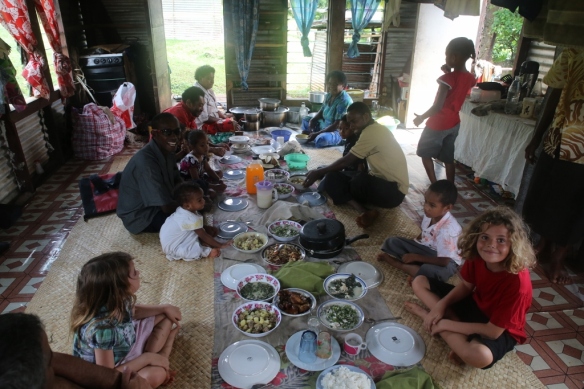 Sunday dinner at the chief’s house. 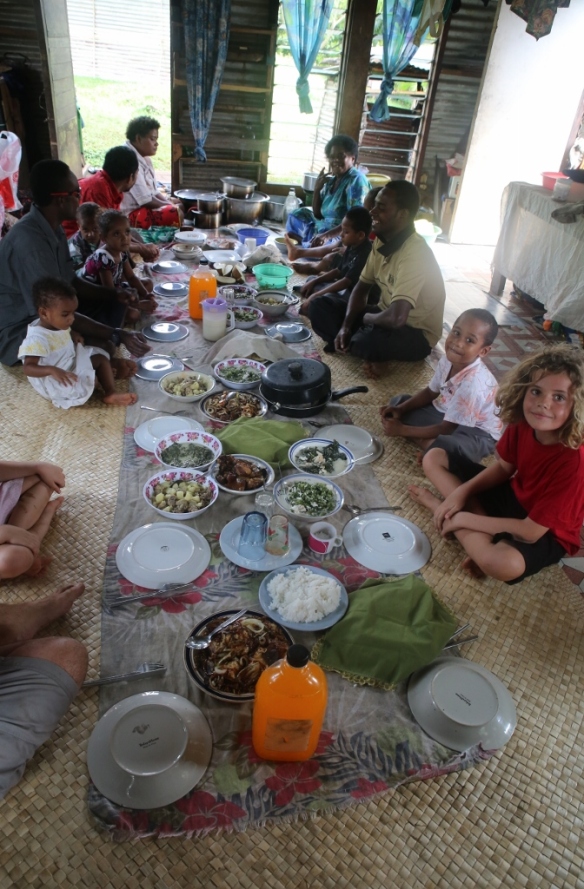 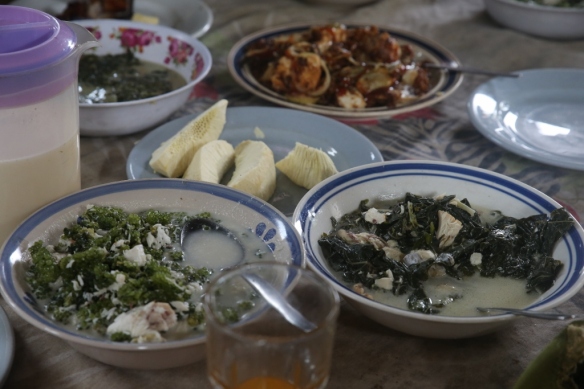 Bele with fish, breadfruit, sea grapes with fish, and chicken with noodles. 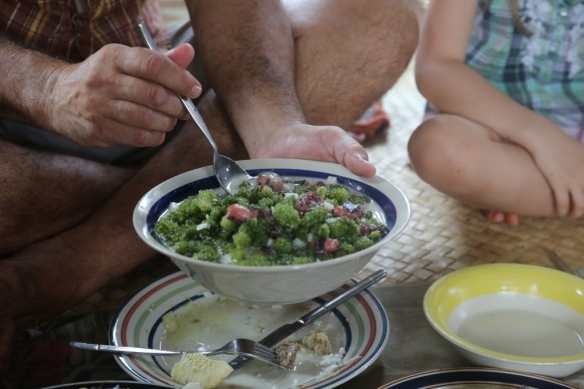 On our last night, Mama brought the women, all the grandchildren, one of her sons, and the village spokesman to Sophie for a kava party. We made popcorn and drank several bowls full of local grog with them. It tasted slightly better than I remembered, less like dirt and more like pepper. 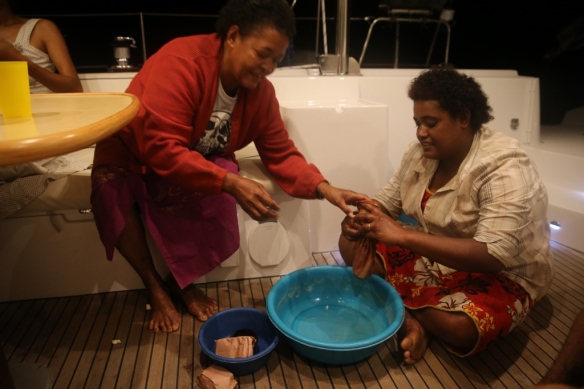 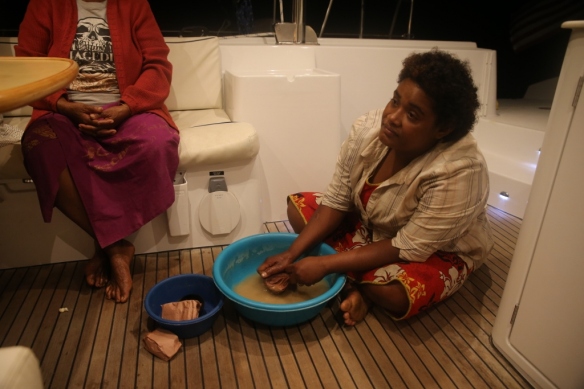 “Kava girl,” as she was nicknamed, served low tide, high tide and tsunami pours of grog. 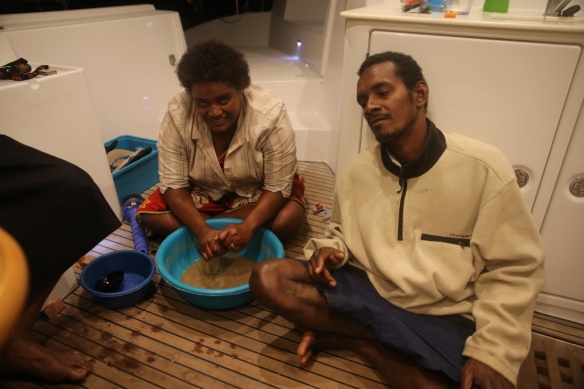 The kids loved eating popcorn and otter pops, and even managed to play a few videogames in my bed.

By Sophie standards this was one memorable party. 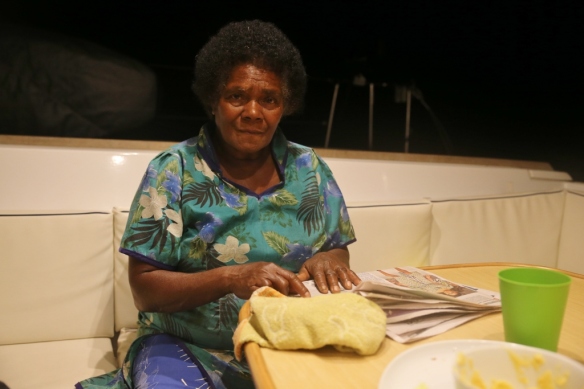 We had such a wonderful time and were sad to leave this friendly community. It was one of the most positive experiences we’ve had on our trip and inspired us to invest more time in each village we visit and get to know the families we meet. 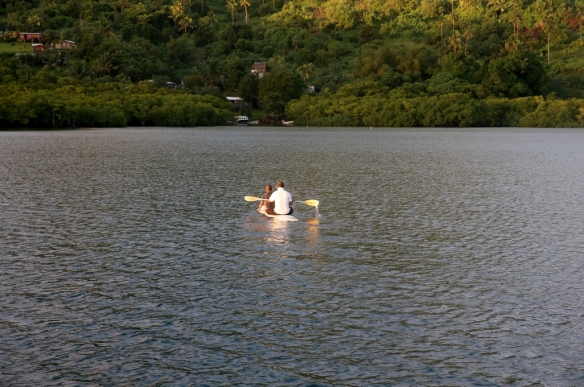 Getting a ride to school. 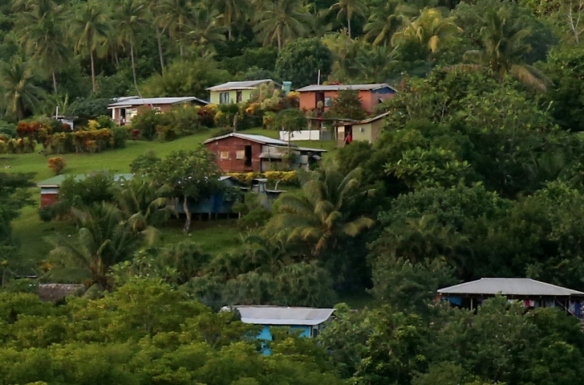 Villagers waving goodbye from their windows and doorways.

Going to work as we depart.

On our way back to Savusavu we caught a lot of fish. First up, this 18 pound Mahi Mahi: 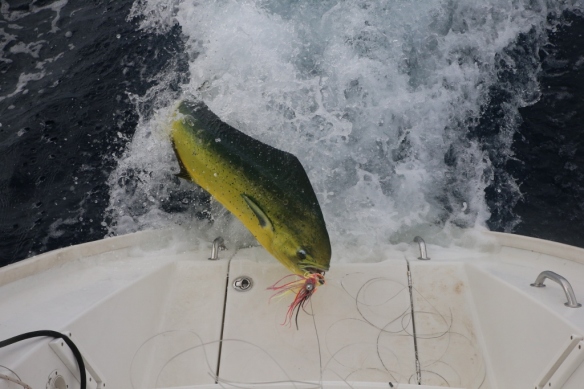 Next we snagged this little barracuda that we let go.

We were about to pull in all our lines when we caught back to back Wahoo on our port hand line, 41 and 34 pounds. We gave a big chunk of one plus both carcasses to the local village. 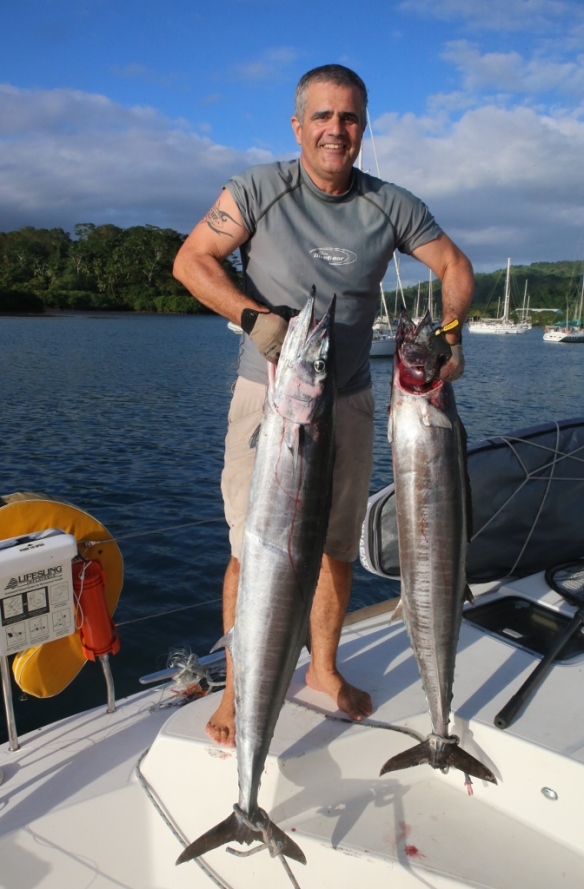 Needless to say, our freezer is now completely full. 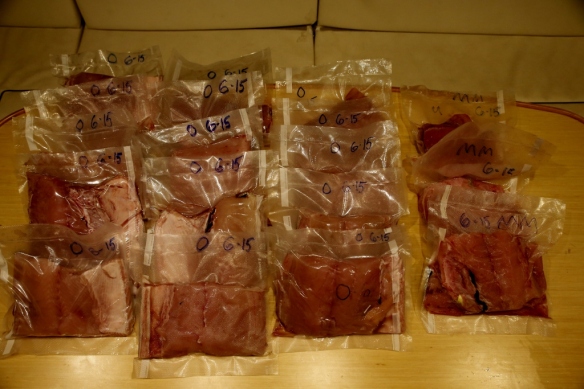 Wahoo bagged and ready to freeze. 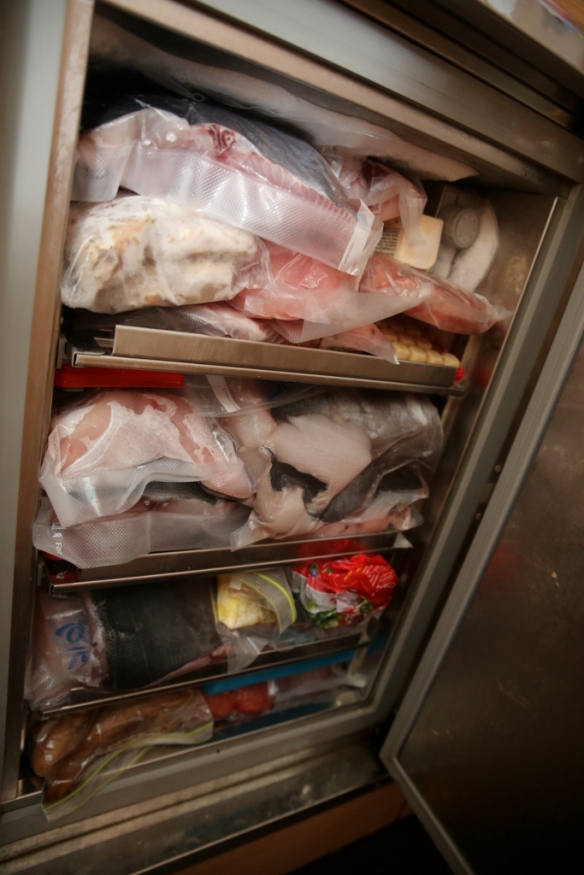 What’s left of our lure after Wahoo bites.

After a quick provisioning run to Savusavu, we made a quick crossing along the north shore of Viti Levu and arrived a few days later to Musket Cove on Malolo Lailai, just in time for Julie and Silas’ arrival. So far this week, we’ve paddle boarded, kayaked, swam, snorkeled, caught a huge sailfish and visited Monuriki and Yanuya, but more on this in our next post. Have I mentioned lately how lucky we are?

2 thoughts on “Rambi and Qamea”