Greetings from Telaga, a small harbor on the island of Langkawi on the northwest coast of Malaysia. This will be our home base for the next four weeks. Our current location is 06.21.743 North, 099.40.669 East. Sophie is now 1,299 miles from Bali, 4,935 miles from Auckland, and only 1,212 miles to Chennai on the Indian subcontinent. We definitely seem to be zipping along, but we will spend the next seven months hanging out between here and Phuket, Thailand, which is only 110 miles to the north.

For the first time since Vanuatu, we fee like we are back in “cruising country.” We are anchored in a small bay with 30 other sailboats, right outside of a marina holding another 50 boats. There’s no real town here, so you have to either rent a car or take a taxi to Langkawi’s commercial center of Kuah if you want to provision. But Telaga harbor boasts a waterfront promenade with outdoor restaurants featuring tapas, Italian, Indian, French, Chinese, and Lebanese food. Meal prices range from $2 to $15 (for filet mignon), and beers cost around a buck.

Did I mention that there are 80 boats here?

The promenade also features flowers, palm trees, and a smiling Jenna, as you can see from the photo at the top of the blog.

Our harbor is protected from the Malacca Strait by two small manmade island that are uninhabited. These have been used as little adventure playgrounds by cruising kids for years, but recently a sign went up declaring Private Property: Anyone Caught Hunting, Fishing, Swimming, or Trespassing Will Be Prosecuted. That didn’t stop Leo and Hazel from spending the afternoon there with their new friend Jana from Momo, because the kids were playing, an activity not specifically covered by the directions on the sign. They did pick up one of their best sunburns of the entire trip, which I think from their perspective was a small price to pay in return for getting an entire afternoon by themselves without parents on their own island.

One of the nice things about spending time in a secure anchorage in a place without too many shore side distractions is that it creates an environment where the kiddies can focus on their schoolwork. This photo isn’t staged, Leo actually likes Sophie school.

Leo’s hard work is paying off, because he achieved an important milestone this week by completing 50% of his fifth grade curriculum. We keep a chart on a bulkhead to track the kids’ progress in Sophie School, and Leo was quite happy to fill in his 50% box.

Leo isn’t the only one on board who is working hard and achieving milestones at school. We are happy to report that Hazel has completed second grade! We are so proud of the effort and dedication both she and Leo put into their schoolwork. Hazel is especially good at getting herself up early and starting schoolwork before anyone else wakes up. Her dad used to deliver newspapers before school when he was a boy, and I guess this is one apple that hasn’t fallen far from the tree.

Now that school is over, Hazel has apparently discovered other ways to occupy herself before everyone else on the boat wakes up. This morning, she looked up from her magazine and said “Dad, can you believe that there is a movie star that loves her butt? She even pays someone to clean and polish it. That’s ridiculous!” I asked her if this person was named Kim Kardashian. Hazel put her hands up to cover her mouth, an endearing trait of hers when she is feeling a little shy, and giggled, “Yes.”

Until today, our children lived in a world where the Kardashians did not exist. Pretty cool. 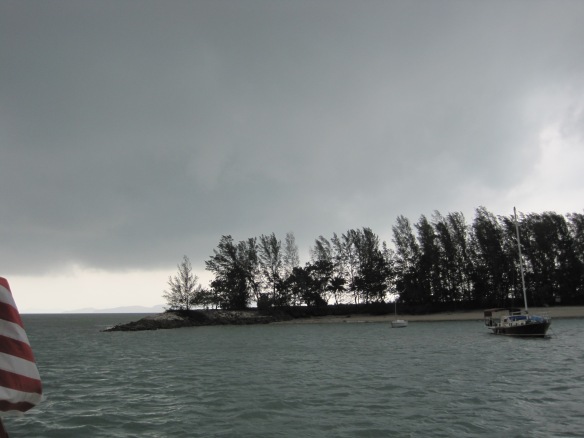 We have been enjoying mostly sunny and dry weather since we arrived here, which of course is not supposed to happen during this rainy monsoon time of year. The kids have been hoping for a “Sumatra,” the name for vicious squalls that form over Sumatra and then hit this coast during this monsoon. They can bring 50+ knot winds, lightning strikes, waterspouts, and cloudbanks that look like a black wall of death. Leo even wrote a report on them.

We were hit by a squall the other day, but it’s subject to an ongoing debate as to whether or not it was a Sumatra. We had gusts that exceeded 40 knots and cycled around 360 degrees. But the black clouds came mostly from the mountains.

The squall hit us in the middle of the day, and in our scramble to gather laundry and tie down the surfboard, Jenna unfortunately slammed her foot into a little plastic hose nozzle that has fallen off the aft cockpit counter and lodged in the teak grate right outside of the cabin entrance. We are not sure if it is broken, but it hurts like heck.

So there you have it. We are back in a tropical paradise with new friends, deserted kiddy play islands, great focus on Sophie school, inexpensive and delicious food, and 50 cent happy hour beers. On the downside, my wife is hobbling, and we now all know that we live in a world where the Kardashians are popular.

On balance, I think we’ll take it. But that’s easy for me to say because I’m not the one with a broken toe.