We’re halfway through a whirlwind trip through the US and I finally found some time to write an update about our last month in Fiji.

One of the best parts of cruising Sophie is the quiet family time we share, and after months of fun with friends, we welcomed the opportunity in June to transition back to our version of normal family boat life in the Mamanucas, the resort islands of southwestern Fiji. The kids focused on finishing school while Max studied for the bar exam. We played in the water, played Settlers of Catan, listened to music, made dhal, falafels and hummus, and devoured many fresh barbecued fish dinners. Although we tried to put a dent in all the fish we’ve caught, there is still a full freezer on Sophie.

We settled in at Musket Cove Resort and Yacht Club on Malolo Lailai Island, where we spent a few weeks last year. It’s as great as we remember, plus they upgraded the island bar and added new gas barbecues so it’s now possible to cook dinner without smoking yourself from head to toe. I can’t say I will miss the dirty, smoky “barbecue outfits” that our cruising friends used just for cooking to avoid contaminating their whole wardrobe, but the new grill plates won’t provide us with as much adventure or entertainment in the wind as those old wood fires did.

Cooling off in the pool.

The lovely Va, our favorite bartender.

Relaxing at the new Island Bar.

My sister Julie and her husband Silas joined us for the last week of June and fun at some of the local attractions. One of our other favorite is Cloud 9, a floating bar with pizza oven that is anchored on the outer reef. Jeff and Melody from DD joined us on Sophie and we cruised over for an afternoon of chillaxing in the sun, snorkeling, and jumping off the upper deck.

A fish followed Max and me around the reef. At first glance, it had looked like a shark but as it approached turned out just to be a huge waloo. I’ve never had one keep following like this one did, almost the whole way back to the platform. 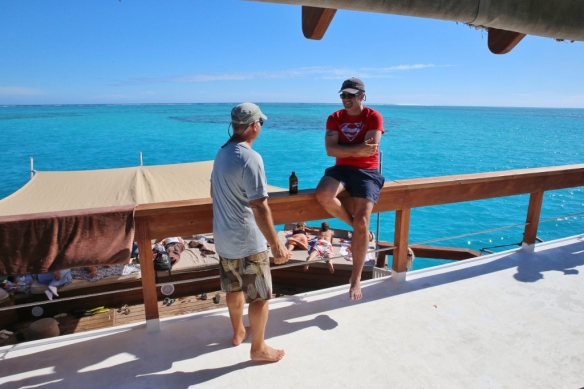 View from the upper deck.

Hanging out at Cloud 9.

This year, everyone made the big leap into the water from the upper deck. Both kids are fearless!

Leo was the first one in. 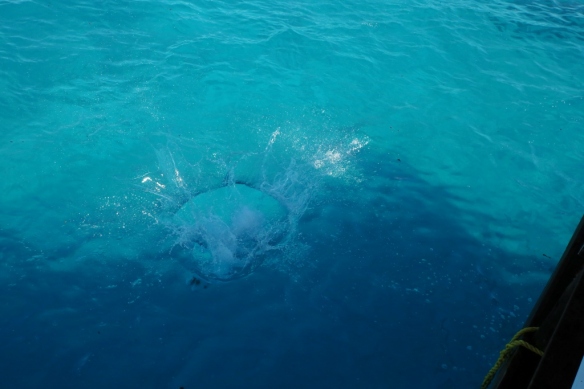 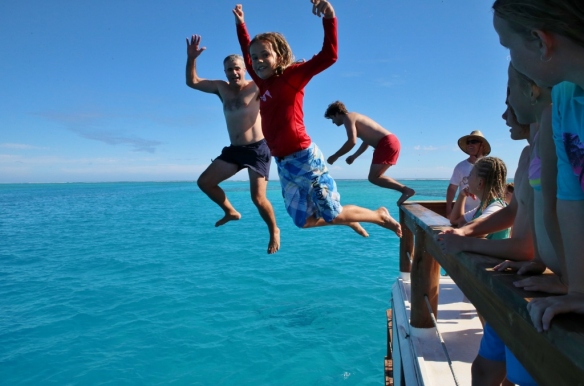 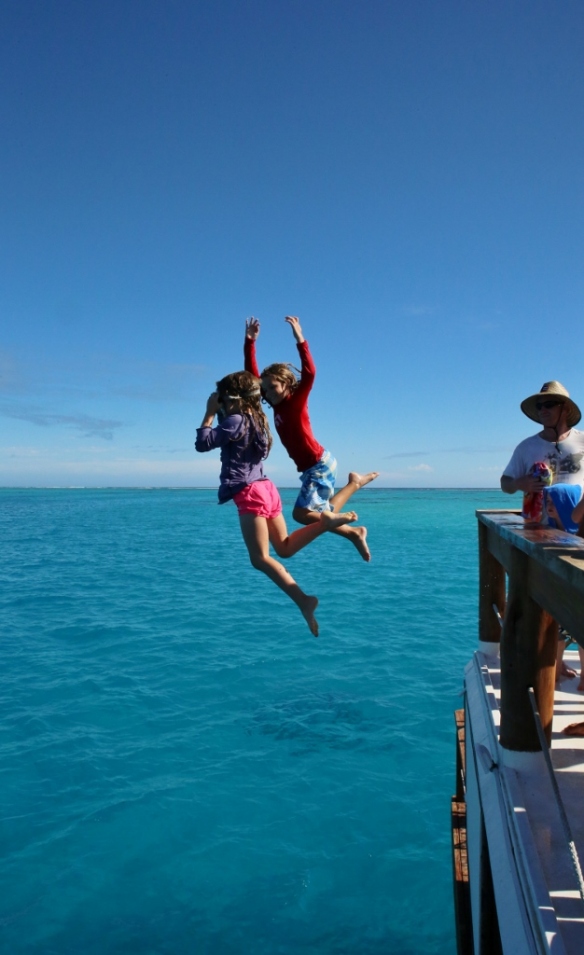 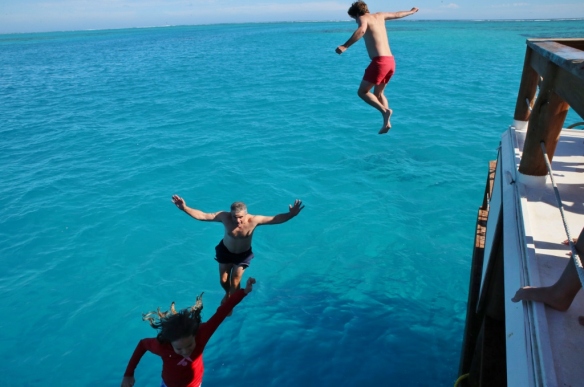 It was a perfect day. 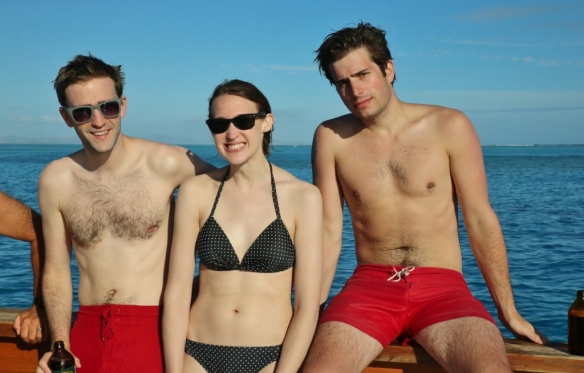 We needed to prep the boat for our USA trip, but we also wanted to cruise with Julie and Silas so we opted for a quick trip to Monuriki Island, where the movie Castaway was filmed. Double Diamond joined us, turning the day into a mini Lagoon rally. Of course we all hoped to sail, but ended up with absolutely no wind so we motored across the glassy sea. 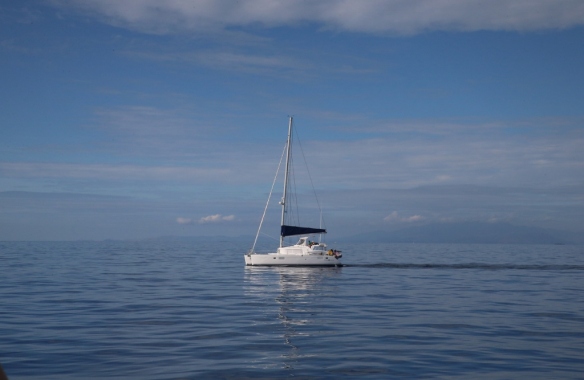 Julie and Silas cruising on Sophie.

Silas had never caught a saltwater fish before, so despite our official Sophie moratorium on fishing until we freed up more room in the freezer, we trolled one line off the pole. Maybe we would catch a little tuna? That was not in the cards. Suddenly we heard the line run out over 300 feet in just a few seconds and looked back to see a huge billfish leap out of the water. I took the wheel while Jamie grabbed the pole to work the fish and 25 minutes later we landed a 100+ pound sailfish. 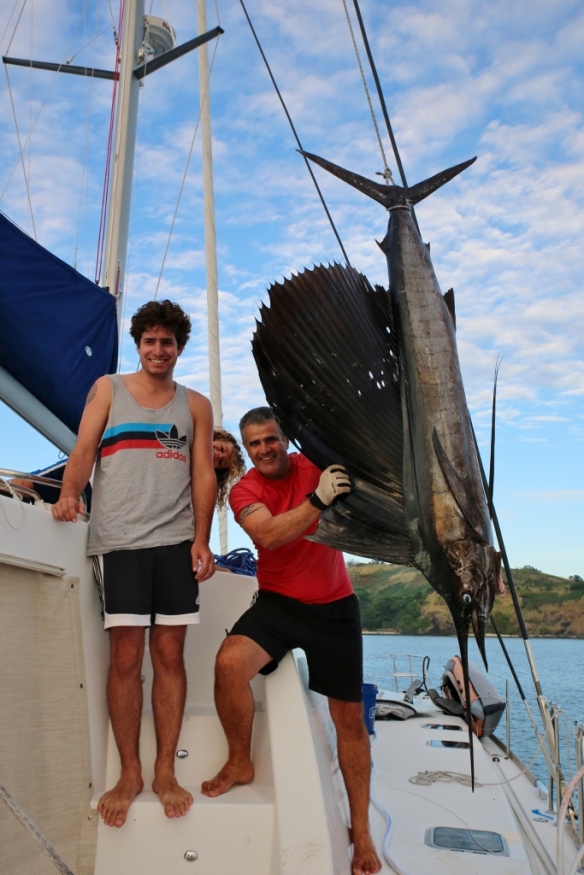 Jamie decided to keep the fish and give it to the local village. It was getting late in the day, so we headed for Monuriki to drop a hook, but after a quick drive by decided the lee shore wouldn’t do for the night so we moved over to Yanuya Island, anchored off the village, and went to shore with a bundle of yaqona for sevusevu.

The ladies prepare kava by squeezing a silk bag of the ground roots underwater. 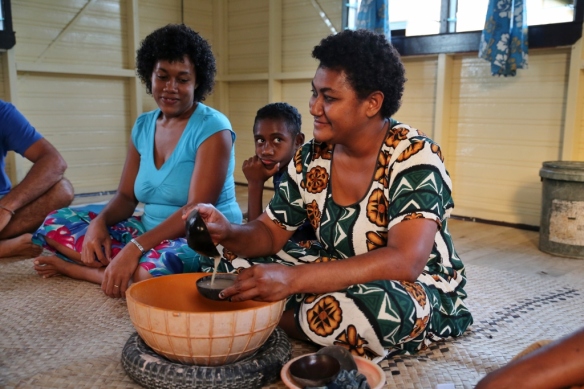 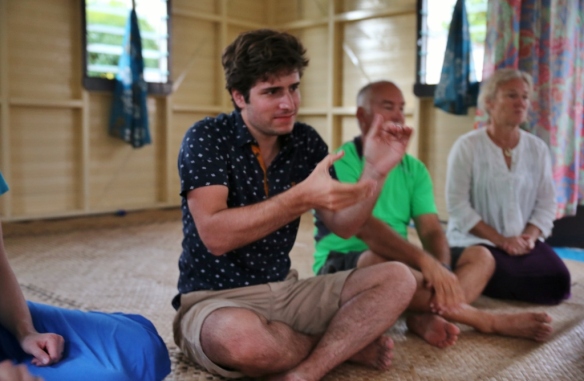 Clap once before accepting the cup. 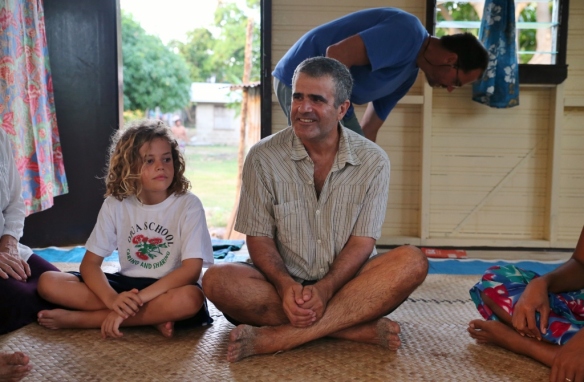 Right before the kava started, Jamie, Jeff and one of the locals went back to Sophie to retrieve the sailfish. Several of the moms met us on the beach and instructed a pack of boys to carry it up to a clearing between some houses. After posing for photos, they laid it out on a piece of plywood and set to work. 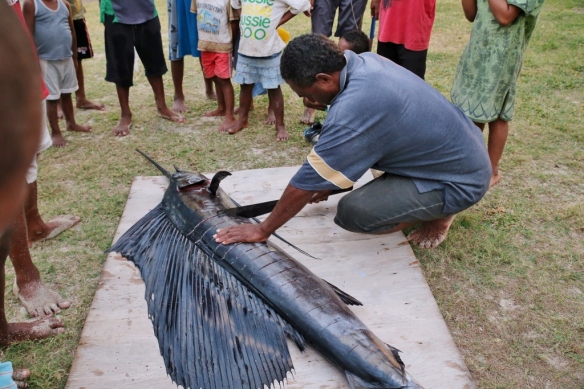 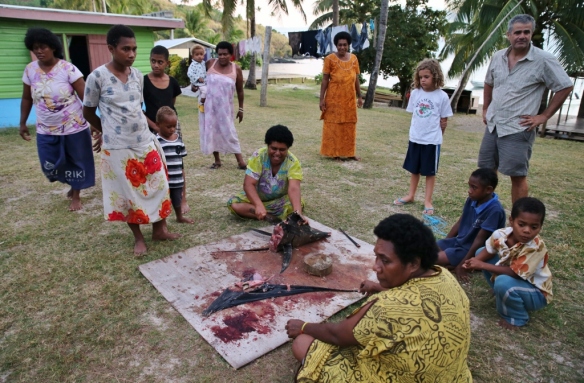 Every bit will be cooked and eaten. 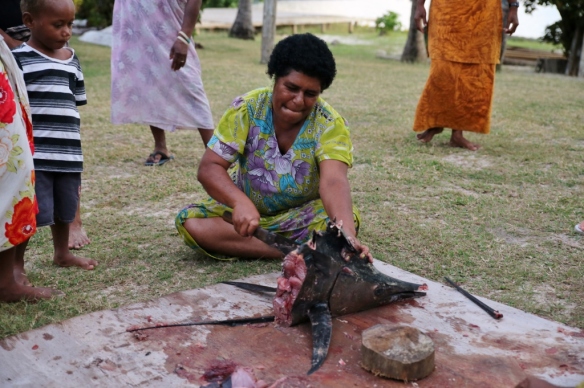 Each family took one chunk of fish to cook for dinner, and they planned to make a communal fish stew with the head. Around 500 people live in the village, another without electricity or refrigeration. They rarely troll for fish given the expense of gasoline and instead typically use hand lines or nets to catch reef fish or small barracuda. Any bigger fish are usually sold to one of the resorts so it was a treat for them to eat one. We were just so happy to share and see all the priceless smiles. 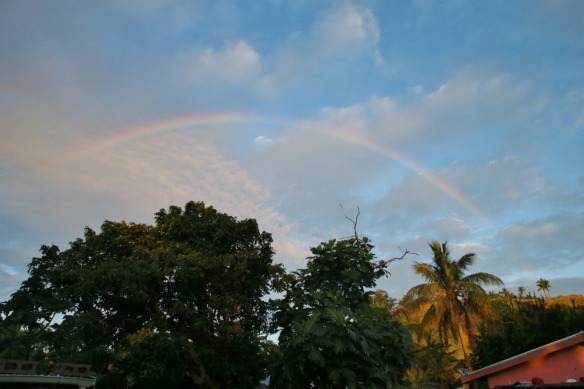 We feel so fortunate to have had another extraordinary experience on our big adventure. The friendliness and hospitality of the villagers was overwhelming and we wish we had more days to spend there. It was hard to leave, but the ebb tide and sun going down beckoned us back to Sophie.

Sunbeams over Monu Island at sunset. 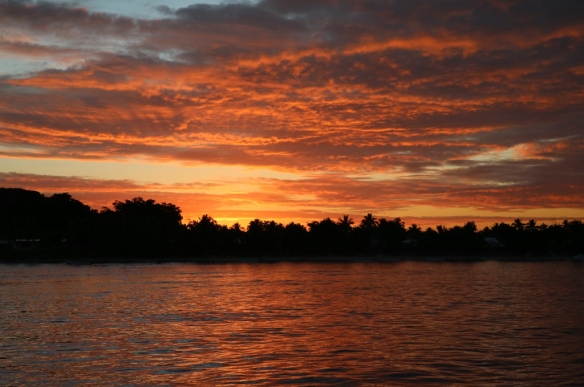 The next day we explored Monuriki, the uninhabited island where Castaway was filmed. A tourist boat left just after we arrived, so we ended up with the island all to ourselves. 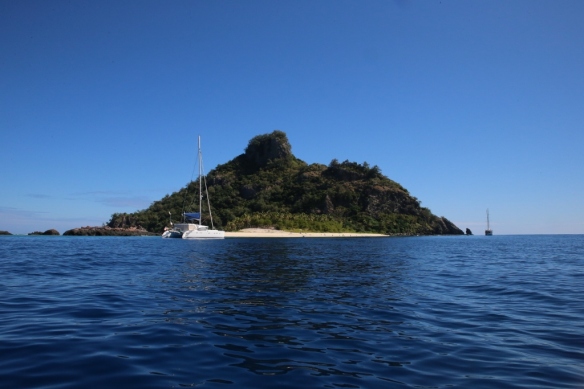 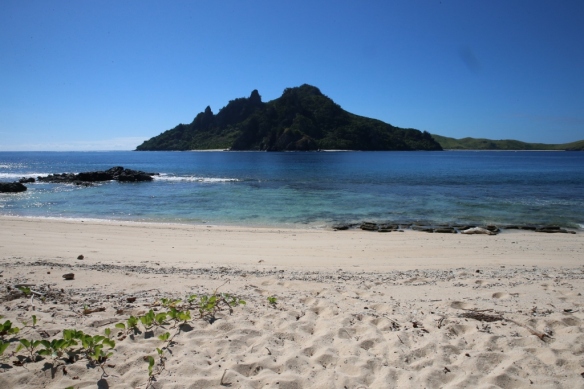 View of Monu Island with Yanuya in the background.

Another beach with Tom Hanks cave at the far end.

Eel trapped in a tide pool. 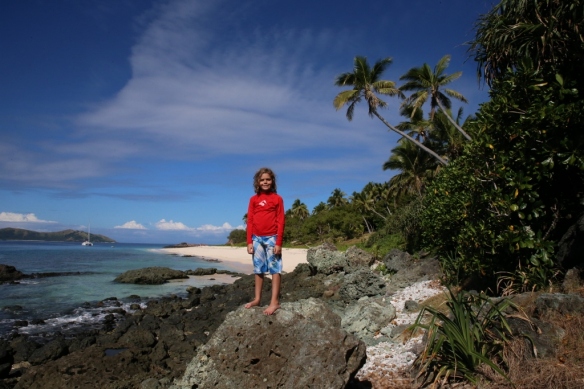 Leo couldn’t understand why Tom Hanks didn’t just swim over to the neighboring island to be rescued.

After a lazy sail back to Musket Cove we enjoyed our last couple days with Julie, Silas and Max swimming, playing golf, and eating out by the beach. Needless to say, we loved every minute with you three in Fiji. Thanks for the incredible family time. Have I mentioned lately how very lucky we are?